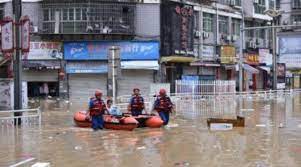 AT least 16 people have died and a further 36 are missing after a flash flood in north-western China, according to a report on state television on Thursday.

The flash floods occurred on Wednesday evening in the mountains in Datong County near the city of Xining in Qinghai Province, after heavy rainfall.

The downpours triggered landslides that blocked and diverted rivers, affecting more than 6,000 people in two towns and six villages, the report said.

Large numbers of the Hui and Tu minorities live in the affected region. (dpa/NAN)