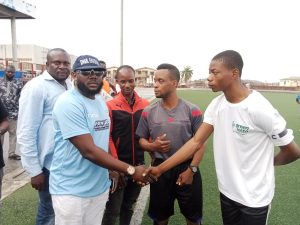 Sponsor of the tournament, Favour Adesida greeting one of the students and other officials during the opening match

Mr Favour Adesida, sponsor of the competition, said the aim was to promote healthy rivalry and bring back memory of the good old days when it was called: Principal Cup.

Adesida told students of the participating schools at the Akure Township Stadium to focus on their studies even if they choose football as a career.

“It is easy for you to marry football with education and become successful in life.

“I appreciate the Ministry of Education for the approval of the competition and also for encouraging schools to participate in the maiden edition.

“I urged the participating schools to play according to the rules of the game.

“I commend Ondo State Football Association and the Akure South Football Council for working tirelessly with his team to ensure the kick off was successful,” he said.

According to Adesida, a lot of exciting team and individual prizes will be won by participants and urge the students to be of best behaviour during the competition.

He promised to sponsor the best player of the tournament outside the country for trials in a prominent football club.

The Chairman of Akure Football Council, Mr Abayomi Ogunlade commended Adesida for his vision to revive secondary school sports in the state.

Ogunlade said if the state had many people sponsoring competitions, enough players would abound.

He urged philanthropists in the state to join hands with the state government to develop sports.

The Game Master of Saint Dominics High School, Mr Aderemi Olaloye praised his players for playing according to his instructions.

Olaloye said his players made him proud with their display from the blast of the referee whistle to the end.

He also commended the organisers for their vision for reviving school sport competition in the state.

The other 12 teams that will play in the week long competition are; Alakure Grammar School that will be up against Army Comprehensive Secondary School, while Aquinas College will face Alagbaka Comprehensive.