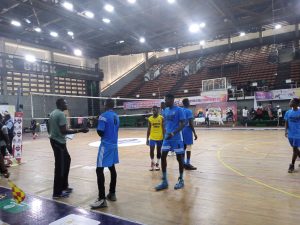 THE Technical Director of the  Nigeria Volleyball Federation (NVF), Martins Melandi,  on Thursday said that the ongoing 6th Legacy Volleyball Championship had set a new standard in the game of Volleyball in Nigeria.

Melandi said this  in an interview with the News Agency of Nigeria (NAN) in  his remarks  about the matches played during the ongoing competition.

The championship is  holding at the Teslim Balogun Stadium and the Indoor Sports Hall of National Stadium, Surulere, and it  has 20 teams participating with 10 for the male category and 10 for the female category.

Melandi said that  judging from the performances of various clubs at the ongoing competition, the players and the coaches had raised the bar.

“The standard set here by the players and coaches is high and worthy of emulation. They have raised the bar in the standard of play.

“As a Technical Director, I am really impressed with the level of play exhibited here so far, from both male and female teams.

“From the first  blast of the whistle till now, different teams have played to their best and we can see that from the results that the teams are levelling  up.

“The reason may not be far fetched because most of the players from the participating clubs belong to the national team. We are not short of expectations,” he said.

Ladele also told NAN that other competitions,  thereafter,  should take a cue from the standard set from this competition.

“The level of play at this 2022 Legacy Volleyball championships is the standard for now,” he said.

NAN reports that for the finals, Team Legacy will play Logistics for the male category, while the female category will have Team Strike Force playing  Team Offa from Kwara.

The sum of one million naira has been earmarked for the winners in each of the competition’s two categories.

The first and second runners-up in the competition would go home with N500,000 and N300,000 respectively.

The Best Spiker, the Most Valuable Player and the  Best Behaved Team in the events would get prizes also. (NAN)