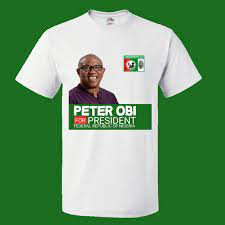 …as Obi-Datti media office urges Nigerians to disregard them

THE Obi-Datti Media Office has urged the public to disregard  concoctions being bandied about in the media about Peter Obi, the presidential candidate of the Labour Party.

It described the sponsors of the materials as haters and frustrated detractors of the leading candidate for the Aso Rock Villa in the February 25 polls.

“We will continue to be amused over the desperation of opponents to search for faults on the front-running candidate of the Labour Party and the apparent frustration of not finding him wanting,” the Office said in a statement.

The LP standard bearer has remained the most searched and fact-checked among the top four candidates…he is the only one running issue-driven campaigns and has generated intellectual conversations.

The LP candidate’s media team says it noticed despair in the detractors who now resort to blackmail to distract the candidate from focussing on the ball.

“We will remain focussed on taking back Nigeria and rebuilding it after February 25, 2023.

“Our mission this day is to alert  especially those desirous to see a new Nigeria emerge through Peter Obi, to ignore and treat as thrash any doctored and faked item on Peter Obi.”

The media team recalled a recent fact check on the fake news generated on the LP flagbearer intrigued an international news media to wonder why some people are dismayed by bright ideas trying to come out of Nigeria.

Recently in the South East, some hirelings recorded a fake video of unknown gunmen pretending to punish a man for allegedly wearing a Peter Obi T-shirt; it was indeed a polo shirt of PDP’s Peter Mba of Enugu State.

The video makers objective was to portray Peter Obi as unwanted in his region and frighten his supporters, which is utterly false. The fake video came ostensibly to counter the heartwarming rallies of the Labour Party in the two South East states of Anambra and Enugu.

Also on Friday while the Obidient movement was shutting down Jos for the arrival of Obi, detractors concocted another video of someone claiming to be an Obidient complaining of missing money for mobilisation. It was doctored to counter the organic nature of Obi’s rallies and make them look like the rented crowds of the other parties.

When the eagle landed on the Plateau, the real members of the Obidient movement took the space and showed the organic nature of their support.

These frustrated opponents not knowing how to halt the political acceleration of Obi are digging out some remarks of Obi’s opponents in previous electioneering and make it look anew.

“The Obi-Datti Media Office will continue to expose their deceptions which have roundly failed since our candidate has demonstrated unequivocally  that he is the best man for the job, having possessed all the required ingredients for the missing leadership in our polity: character, capacity, competence and capabilities.”

“We, therefore, remind everyone that Peter Obi, the head the cap fits, is seeking the Nigerian people’s mandate to serve and provide what has been lacking in our country and he comes proudly with attractive and satisfactory features embedded in his lifestyle and antecedents in his public and private life.”