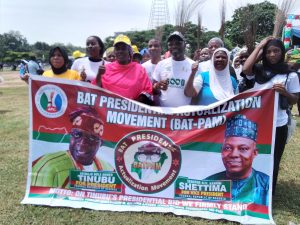 THE All Progressives Congress (APC) on Wednesday flagged-off its campaign rally for the Presidential flagbearer, Asiwaju Bola Ahmed Tinubu, and his Vice, Kashim Shettima, at the Unity Fountain in Abuja.

The News Agency of Nigeria (NAN) reports that majority of Tinubu Support Organisations thronged the venue in their numbers with placards and banners.

Sone of the placards read: “Tinubu 4 2023” and “BAT-PAM Actualisation”, among others.

It could be recalled that the Presidential Campaign Council of the party had postponed the commencement of its campaigns earlier scheduled for Wednesday.

This was disclosed by the Director-General of the Tinubu/Shettima Presidential Campaign Council and Gov. Simon Lalong of Plateau, in a statement on Tuesday.

According to him, prosecuting the agenda will require dedication, mobilisation, skills, resources and loyalty of all members of the party to enable them win the elections.

He said the group’s presence and the turn out of the people are testament to the fact that Nigerians have chosen APC and will demonstrate this choice at the polls.

Mrs Oluwatoyin Bargbon, the President of Asiwaju Women Cooperative Society, said the campaign would provide the needed opportunity for women to be actively involved in politics.

She assured that that the APC government headed by Asiwaju Bola Tinubu as the president would make the 35 per cent women appointees a reality.

On his part, Mr Jamaludeen Kabir, the Deputy National Youth Leader of APC, called on youths in the country to obtain their Permanent Voters’ Card (PVCs) and vote Tinubu in the 2023 presidential elections.

Kabir advised that obtaining the PVC was an important civic responsibility, as such only the PVC would give the youths power to elect their presidential candidate.

He also advised them not to engage in any form of malpractice during the general elections, but serve as agents of positive change for democracy to thrive in the country.

“The youths should ensure they collect their Permanent Voter Cards and vote Asiwaju Bola Ahmed Tinubu during the 2023 presidential elections.

“I also urge the youths to remain law abiding citizens for a peaceful and credible election, they should also shun violence and remain resolute throughout the campaigns.

“The attainment of a good election is dependent on full cooperation and support of the youths, and avoiding any form of violence during election,” he added. (NAN)