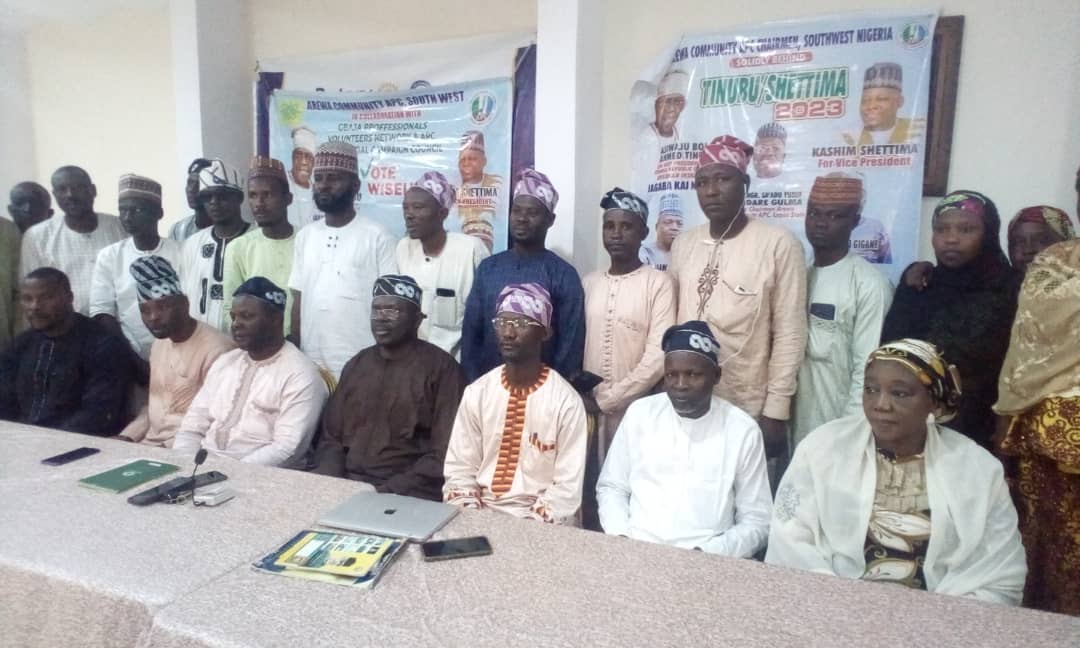 MEMBERS of Arewa Community across the six states in the South-West zone, have declared their supports for Bola Tinubu, the Presidential candidate of the All Progressives Congress (APC), in 2023 elections.

The group made the declaration on Friday in Ibadan at inaugural meeting of the APC South-West Arewa Community and Declaration of Door to Door Campaign.

In his remarks, Alhaji Sa’adu Dandare, the APC Chairman of the group in the South-West, said that it was necessary for Tinubu to emerge as the next President of Nigeria.

According to him, this became necessary at this critical stage, when insecurity was gradually threatening peaceful coexistence we have been enjoying in the South-West.

Dandare urged Nigerians to vote for competence ahead of religion, saying that there was need for the people to unite in the interest of the country.

He said that the group would mobilise support for victory of Tinubu and his running mate, Sen. Kashim Shettima, as well as other APC candidates in the country.

The group chairman said that the coming together of Arewa leaders has wide acceptability and huge strength of mobilisation.

Dandare said that the group would throw their strength toward the success of Tinubu/Shetima ticket and other APC governors across the states.

He pledged their supports, loyalty and dedication toward the cause.

“We, the leadership of the Arewa Community, are determined to regulate our teeming population to avoid influx of bad elements coming into our long age settlement to perpetrate evil acts.

“We are also resolute to legitimately protect our law-abiding members who are victims of circumstance,” he said.

Dandare said that the inaugural meeting had boosted the confidence and morale of their teeming members across the region.

“We have been tasked to immediately set up a strategic team to implement our major pattern which is the “Door to Door” campaign.

“Over time, this has been identified as our best strategy for delivering huge votes for our dear party across different settlements in the South-West,” he said.

The chairman said that the composition of the movement made it a major force very significant toward delivering massive support for the APC.

Also, Hadi Sani, the Special Adviser to Governor of Ogun
on Inter-Ethnic Affairs, said that Nigerians shouldn’t vote based on religion.

Sani urged them to vote a dedicated, sound and qualified person like Tibubu as the next President.

“He deserves our full supports, irrespective of ethnicity. We are supporting him to deliver the country from its current predicaments. He is competent, capable and has raised many people,” he said.

Contributing, Alhaji Bashir Bubakar, the Chairman in Oyo State, said Tinubu should become the next president for the sake of equity, justice and fairness.

Bubakar said that rotational government was what the nation need to keep going.

He described Tinubu/Shettima’s ticket as a perfect combination to move the country forward comes 2023.

Among those present at the meeting were
Alhaj Umar Muhammed, the Special Adviser to Osun Governor and Alhaji Shehu Gigane, the APC Chairman of Arewa Community in Ekiti.