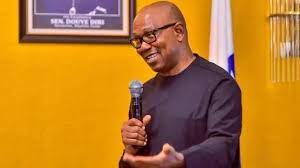 MOVEMENT For Election of Nigeria President of Igbo Extraction has condemned and decried attack on convoys of presidential candidate of Labour Party Mr Peter Obi after successful electioneering campaigns in Katsina State.

This is contained in a press statement issued to newsmen endorsed by Evangelist Comrade Vincent Ezekwueme Convener/National President and Amb. Prof. Justus Chidi National Secretary tagged”let us make friends not enemies, think the best not the worst of others” (Dr. Nnamdi Azikiwe)

The act is barbaric, insensate, despicable and horrendous.It is very unfortunate and pathetic that this despicable incidence happened now collective and collaborative efforts are channels towards ensuring peaceful, credible,free, fair and commendable 2023 general elections that will foster national unity, integration and cohesion.

Recall that the group had prior to commencement of electioneering campaigns calls on candidates, political parties, politicians and stakeholders not only to play the game of politics according to rules, but also most importantly to calls their overzealous supporters to refrain from casting unnecessary and unsubstantiated aspersions on imagery and perceived opponents.They should respect with dignity views and interest of the opponents and embrace politics without bitterness and rancour.

We appeal to Katsina State government, Police high command and other security personnel to order for discreet and indepth investigation to unravel circumstances surrounding the attack in order to forsetall future occurrence.We equally appeal to government to beef up security around all the presidential and governorship candidates in view of current security challenges bedevilng the country.

Similarly in view of frustrations and disappointments encounters by registrants in collections of their PVC,it will be a step in the right direction and welcome development for Independent Electoral Commission to extend period of PVC collections for two weeks to enable every registrants to obtain their PVC because it is only  veritable  weapon to enthroned good governance and leaders. INEC should device less cumbersome means and ways for disbursement of PVC to the registrants as well as probe alleged sharp practices by some INEC officials especially in southeast that has made voters card collections excruciating sufferings and unbearable pains.