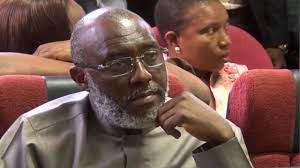 OLISA Metuh, former spokesman of the Peoples Democratic Party (PDP), has described reports that he is still involved in partisan politics as baseless and false.

Metuh, who denied the allegation via a press statement he personally signed, said he has not been actively involved in 2023 politics.

The statement reads in part; “My attention has been drawn to a misleading publication of Thursday, January 19, 2023 which has created an impression that I am still involved in partisan discussions relating to the 2023 general elections.

“For emphasis, I neither had any interview nor have I spoken to the media on any matter relating to partisan politics in the last three months.

”For the avoidance of doubt, since my resignation from partisan politics in October, 2022, which was widely reported, I have never made any statement to the media on any matter relating to partisan politics or the fortunes of any political Party or candidate under any stand whatsoever.”I worked and served my party faithfully for over 20 years. In my time I rose to become one of the most influential party officers and I assisted and influenced the careers of a whole lot of legislators, minsters and governors. I now seek to assist and influence the affairs of citizens no matter their political leaning.

”I have now wholly focused on my private affairs as well as my non-partisan engagements in areas of sustaining and deepening democracy and governance in Nigeria and globally. There are so many areas to help the nation besides any quest for personal promotion and/or offices.

”I remain committed to my conviction, as I stated in October 2022, that being Non-Partisan is a sacrifice but which gives me the status to work for the strategic interest and well-being of the Nigerian people without the hinderance of partisanship.”