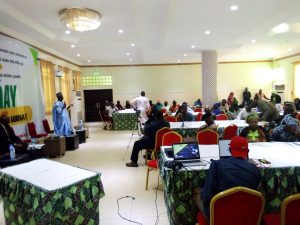 at a one-day agenda setting dialogue with the CSOs

The candidates made the observations in Kaduna at a one-day agenda setting dialogue with the CSOs ahead of the 2023 general elections.

The News Agency of Nigeria (NAN) reports that the engagement, organised by Partnership for Issue-Based Campaigns in Nigeria (PICaN), was supported by Partnership to Engage, Reform and Learn (PERL) in collaboration with Legal Awareness for Nigerian Women (LANW).

He said in the education sector in Kaduna state, there was inconsistency in policies which hampered the overall objectives of ensuring sound education and welfare of teachers.

“Today you sack and recruit new ones, tomorrow you also sack half of the ones you recruited, among the ones recruited, you don’t deploy them for the work,” he said.

Ayuba added that policy somersault had affected the education sector in Kaduna state.

He promised to ensure job security, especially that of teachers in the state and also roll out strategies that would ensure safety of lives and property of every citizen and resident in the state.

“Our security agenda will be community based, the distance is too much between where acts of insecurity are perpetrated and security operatives.

“We will empower communities to be the first line of resistance to criminals and terrorists before help comes,” he said.

“It is worrisome that in spite of the huge amount of funds put into these sectors, they still function at a minimal level.

“We will all put them in place if we emerge victorious in the coming 2023 elections,” he said.

Also, the Labour Party (LP) candidate, Jonathan Asake, said the spate of insecurity in Kaduna State and by extension the entire country, was worrisome and counter development.

He said addressing insecurity would be the topmost agenda if they emerged winners of the governorship seat in 2023.

Asake added that they were working on ways of fighting the menace of insecurity in the state, noting that without security, virtually everything would come to standstill.

“A lot of businesses and investments in Kaduna have folded up, small and medium enterprises have gone down, and most schools in the rural and suburb communities have closed down because of banditry and kidnapping.

“Virtually, life has become standstill because of insecurity, farmers can’t go to their farms, and this caused hunger, skyrocketing of price of food items,” he lamented.

Asake said that if the LP produced the governor of Kaduna State, he would address ungoverned spaces where bandits and criminals were resident.

He promised to bring back effective functionalities of traditional institutions like the village, district heads and youth leaders by reestablishing them to ensure provision of security in their domains.

He further said they would empower the local vigilantes, forest guards and hunters to maintain security at local levels.

“When terrorists were terrorising communities in Burkina Faso, the Government knew that they didn’t have enough Police manpower to cover all the communities, they empowered the locals and within the shortest period, the whole thing calmed down.”

On his part, Dr. Andrew Duya, the All Progressives Grand Alliance (APGA) candidate, said he would not work in isolation of the citizens demand when if he emerged Governor of the state.

On how to tackle insecurity, he said: “The terrorists are not ghosts and spirits, we know where they are, as a retired Police man, I will lead in the operations and confront them,” he said.

He added that he would explore the citizens power and resources by giving them the equipment to secure their communities.

“Nigeria has been paying leap service on the issue of community policing, in advanced countries, every community has its own Police.

“The community Police know every nuke and cranny in the community, and the people.

“We will employ such strategies to ensure security without which there will not be meaningful achievement and development,” Duya said.

Also, Hayatudeen Makarfi, the Peoples Redemption Party (PRP) candidate, said the party had an existing template that was perfected in 1979 to 1983.

He said their core areas of priority was social justice, economy and skills/education.

According to him, the reason people feel maginalised and disenfranchised results from decay and failure of the social system.

“We will ensure quick dispensation of justice, decongestion of prison, and administration of justice in the courts by automating the state judicial Institutions,” he said.

Regarding security, Makarfi said they would not approach the problem from defence perspective, but through the cause.

“The challenge is not fighting terrorists with bullets, it is how we can engage, dialogue with them and find a way of reintegrating them to the society. (NAN)