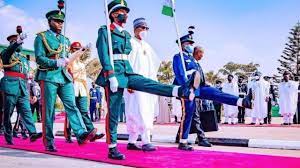 FORTY days to this year’s presidential election, the Nigerian military has assured that it will shield democracy and ensure its sustenance by guaranteeing peaceful conduct of the election.

Chief of Defense Staff, General Lucky Irabor, who made the pledge Sunday in Abuja ruled out the possibility of the military taking over power in Nigeria, saying democracy has come to stay in the country.

The CDS was fielding questions from journalists at the wreath-laying ceremony that marked the climax of the 2023 Armed Forces Remembrance Day Celebration at the National Arcade, Abuja.

“I have been discussing with the Inspector General of Police (IGP) and of course, we have also made contingencies should we be required to give support to the police as the election is conducted.

“I think for Nigerians, you are rest assured that the armed forces remain solidly behind the police to be able to give them all the support as required,” he said.

Meanwhile, President Muhammadu Buhari has led other senior members of the government to participate in the wreath-laying ceremony that marked the climax of the Armed Forces Remembrance Day Celebration.

Buhari, who inspected the Guard of Honour, accompanied by the Commander, Brigade of Guards, Major General Muhammad Takuti Usman, at the National Arcade, later proceeded to the Cenotaph for the wreath-laying ceremony.

Among the dignitaries that laid wreaths after the president were Vice President Yemi Osinbajo; President of the Senate, Ahmad Lawan; Speaker of the House of Representatives, Femi Gbajabiamila; and the Chief Justice of Nigeria, Justice Olukayode Ariwoola.

Buhari, who also performed the symbolic freeing of white doves out of the cage during the event as a symbol of national peace and freedom after signing the anniversary register, had the 2023 wreath-laying ceremony as his last as commander-in-chief.There was also the firing of three volleys in honour of the fallen heroes which has its origin in the old custom of halting fighting on the war front to remove the dead from the battlefield.

Also in attendance were members of the Federal Executive Council, including the Secretary to the Government of the Federation, Boss Mustapha; Chief of Staff to the President, Professor Ibrahim Gambari; and the National Security Adviser (NSA), retired Major General Babagana Monguno, amongst others.

While speaking, the Permanent Secretary, Ministry of Defence, Dr Ibrahim Kana, assured serving, retired and families of deceased military personnel of the federal government’s commitment to ensure improvement in their welfare and wellbeing.

He said the government would continue to remember their sacrifices and ensure that the injured were given adequate and better medical care.

The chairman, Nigerian Legion, Maj.-Gen. Abdul-Malik Jibril (rtd), commended President Buhari for his commitment to the welfare and well-being of military veterans.

He said the government had done a lot for the veterans, adding that there was no military veteran that would complain of non-payment of his or her entitlements.He however called on the government to continue to improve their welfare and attend to their requests whenever the need arose.

The president, Military Widows Association, Mrs Veronica Aluko, called on Nigerians to continue to support widows of fallen heroes through the association.

She commended the government for its commitment to alleviating the situation of the widows, urging it not to relent. The French Defence Attaché to Nigeria, Col. Guillaume Dujon, expressed delight with the celebration, saying his country shared a similar military tradition with Nigeria.

He said Nigeria and France had maintained cordial military relations over the years, adding that France had been offering support to Nigeria in the fight against terrorism in the North East.

Some of the widows of the fallen heroes interviewed by Trust Tv lamented the difficulty being encountered to attend to the basic needs of their families.

The widows, who live in Sabo, Kuchingoro, Abuja, said it was difficult to cater for their needs since the departure of their breadwinners.

Martah Zakaria , a widow of a fallen soldier, said: “I lost my husband. I am suffering. The only thing we achieve since his death is an engine (grinding machine) which was given to all widows that lost their husbands.

“And government gave me free accommodation because of being the leader of the widows. They later decided to seize the house given to me and gave it to another widow. They gave N9,000 and since then, none of his entitlements has been given to me.”

Mary Emmanual, another widow of the fallen hero, said though military authorities are trying in settling some of the entitlements of the departed soldiers, the larger chunk remains unpaid.

“It’s a pity that over nine years, my case in particular, I have widows whose husbands died 2011, 2012, but yet to receive this money I am talking about, which is Group Life Insurance,” she said.report this ad

Ogun State Governor Dapo Abiodun, during the celebration of the day at the Arcade ground, Oke-Mosan, Abeokuta, called on Nigerians to always show love and appreciation to the families of fallen heroes who laid their lives for the country.

He asked Nigerians to inculcate a daily habit of showing love and appreciation to the families of the fallen heroes, saying without them the country would not have enjoyed peace, order and socio-economic development.

The governor also harped on peaceful co-existence and inter-party tolerance ahead of the next elections in the state.

He warned that anybody, no matter highly placed, would be dealt with if found culpable in electoral violence.

He called on the authorities to always remember and give care and attention to Nigerian soldiers who fought many wars, including the Nigerian Civil War, and are still alive.

He said many of them were languishing in health or economic conditions without adequate care and support.

Kwara State Governor AbdulRahman AbdulRazaq has said the country must continue to sustain the immortalisation of its fallen heroes because of the services they rendered in maintaining peace and keeping the territorial integrity of the country.

The governor, who spoke in Ilorin at the celebration of the 2023 Armed Forces Remembrance Day, said citizens should continue to support the armed forces for their role and sacrifices to ensure a peaceful country.

He said it was necessary as a country to continue to immortalise the fallen heroes for being patriotic and the sacrifices they render to guarantee the safety and survival of mankind. He also said robust security controls were being worked upon by President Muhammadu Buhari to create a peaceful environment for the conduct of elections come February.

“The main message surrounding the election is for us to have a robust security architecture and peaceful environment to conduct the election.

“The president has assured the security agencies to get the necessary support from the government,” he added.

The Akwa Ibom State Governor, Udom Emmanuel, has called on politicians not to threaten the unity of Nigeria for the desire to get power. Speaking during the Armed Forces Remembrance Day Celebration in Uyo, yesterday, Emmanuel said Nigeria needed to remain indivisible for the leadership aspirations of politicians to become a reality.

The governor explained that the nation’s diversity was being exploited for narrow political advantage, and encouraged Nigerians to extend the frontiers of love and brotherhood so that the sacrifices of the gallant, fallen officers will not be in vain.

“We should fan the embers of our unity deeper and extend the frontiers of love and brotherhood further, so the sacrifices of these gallant officers and men of the Nigerian Armed Forces we have come here today to honour, will not be in vain,” he stated.

In his commemoration message at a ceremony held at the Ekiti Parapo Pavilion, Ado Ekiti,  Ekiti State governor, Biodun Oyebanji, urged Nigerians to live in humility, love, peace and harmony with one another.

He noted the sacrifices made by the fallen heroes in working for the unity of the country and urged the citizens to ensure the sustainability of peace, unity and stability in the country by showing understanding for one another.

Oyebanji implored Nigerians to shun hostility, stressing that when there is no fighting, there will be no war. In his remarks, the chairman, Nigerian Legion, Ekiti State Chapter, Colonel Atoki Abdulrasaq (rtd), urged government to give them more recognition.

He said with their experience, they could help other security outfits in getting rid of criminals in the country. The governor of Ebonyi State, David Umahi, at the wreath-laying ceremony which took place at the Unity Square, Abakaliki, the state capital, signed a condolence register as a mark of respect to the gallant heroes.

On his part, Rivers State governor, Nyesom Wike, commended President Muhammadu Buhari for his sustained efforts at defeating the Boko Haram insurgents and bandits terrorising and destroying parts of the country.

He gave the commendation at the government house, Port Harcourt after the wreath-laying ceremony to mark the 2023 Armed Forces Remembrance Day celebration at Isaac Boro Park on Sunday.

The governor noted that after the civil war broke out a few years after independence, the armed forces were forced to quell the ensuing rebellion, which ended after three gruesome years of internecine warfare. He said ever since, there was hardly a year that members of the armed forces were not assigned to one bloody combat mission or the other, within or outside the country.

The governor maintained that the country must move beyond today’s courtesies, speeches and parades to consider the families, including the innocent women and children directly devastated and thrown into untold hardship by the deaths or incapacitation of their breadwinners on the battlefield.

This, he said, called for prioritising the welfare and well-being of the armed forces in and out of service and their families with a concrete social security package, including prompt payment of terminal benefits and some form of economic security for the widows and their under-aged children.

He recommended that those suffering from various health challenges, including post-traumatic stress disorders, should have the best healthcare and attention from the public purse.