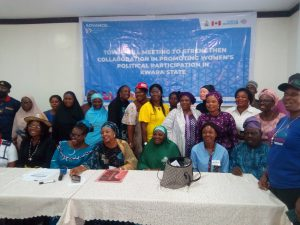 THE Royal Heritage Health Foundation, a Nigerian NGO, in collaboration with the United Nation (UN) Women and Canada, has sensitised women in Kwara on gender balance and political participation.

Ms Abimbola Oyinloye, the Programme Officer of the foundation, who spoke on the sidelines of the programme, explained that the event is to sensitise women on the need to participate actively in Nigeria’s 2023 general elections.

She explained that women’s equal participation and leadership in political and public life are essential to achieving the Sustainable Development Goals by 2030.

Oyinloye explained that the activity is part of implementing the UN women in political participation project.

According to her, the sensitisation is organised for various stakeholders including religious organisations, civil societies, political groups and youths.

She observed that the sensitisation campaign for women across board and some stakeholders among men would help build their capacities, and offer voter and civic education on gender equality.

She called on political parties, governments and other groups to do their part in empowering women.

Mrs Oluremi Chiroma, the Head of Gender Unit of the Independent National Electoral Commission (INEC), noted that gender issues affect all aspects of an election, ranging from pre-election, post-election and election periods in respect to all the election activities.

Her presentation was titled: “Women Political Participation in Nigeria: Challenges and Way Forward”.

Chiroma asserted that women are being marginalised around the world, which is why they were not given equal legal rights to the electoral systems to stand for elected offices.

She called for initiatives which will encourage young men and women to engage in advocacy around making gender equality measures central to public policy making.

She added that INEC provide capacity building workshops for political parties’ members and NGOs to increase female political participation by desiating from the patriarchal mentality.

Chiroma emphasised that Nigeria should be part of the global trend towards gender equality, while calling for political collective behaviour revolution that surpasses the 35 per cent affirmative plan.

“There is need for Nigerian government to enact gender specific laws to curb gender violence,” she said.

On her part, Mrs Anthonia Oshiniwe, the Executive Director of Theios Caregivers Initiative, said the sensitisation would ensure women are empowered on political participation.

She identified some of the factors affecting women participation in politics to include religious and cultural beliefs, lack of education and poverty. (NAN)