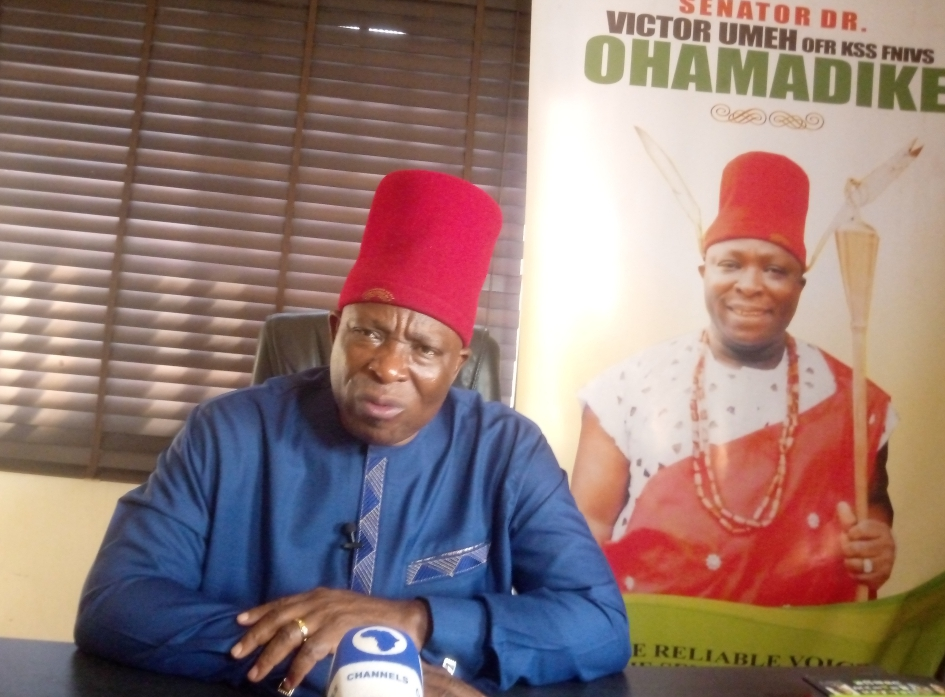 SEN. Victor Umeh, candidate of the Labour Party, has described as illegal and unfortunate the removal of his campaign billboards by the Anambra Government.

Umeh who spoke at a media briefing in Awka on Tuesday, said the billboards were duly paid for and signage fee paid to the government by the outdoor company handling the space.

The News Agency of Nigeria (NAN) reports that the Labour Party campaign billboards on the pedestrian bridge at Unizik Junction, Awka on the Enugu-Onitsha expressway were on Jan. 14 removed and replaced with that of All Progressives Grand Alliance (APGA).

He said the space became vacant in December 2022 and the outdoor advertising company managing it contacted him to inform that it was available for sale.

Umeh said he entered  negotiation with the company and they agreed for N1 million for both sides which he paid and  had his campaign billboards erected on Dec. 24.

“We do not have any problem with the Anambra Government, what you see is all politics but we are surprised it will come to the level of removing our lawfully hoisted billboard and replacing it with their own which says Anambra is APGA land.

“That pedestrian bridge over the expressway is not the property of Anambra State; Mr Peter Obi built that bridge when he was the Governor and the Federal Government fully reimbursed the state, I was in the state when it was paid.

“So, it is unfortunate, it is unlawful because there is an existing contract and even if the government considered the space very strategic, I paid for it,” he said.

Umeh said he had no regrets for supporting Prof. Chukwuma Soludo to become governor of Anambra and that he did not intend to seek legal redress on the matter but had abandoned his fate to God.

He said the action was arbitrary and in defiance to the tenets to the rule of law under democracy.

According to him, “my right had been infringed upon and the election is just to about six weeks away, so going to court will amount to distraction.

“I have decided to run to God for protection while waiting for the advertising agency to give me update because I am actually a third party in that contract.

“I am not bothered, I am not discouraged, I have gone through persecution and such things do not  weigh me down, it is just a ploy to put a setback on what I am doing but I will not allow them distract me, billboard will not determine who wins,” he said.

Meanwhile, Gov. Soludo had said he did not order for the removal of any political candidate’s billboards in Anambra State and that only the Anambra Signage and Advertisement Agency (ANSAA) had regulatory powers over billboards.

Mr Christian Aburime, Press Secretary to Soludo who said this in a Statement, stated in August 2022 that  ANSAA sent out letters to all the political parties in Anambra State to obtain political campaign permits as provided by law but no payment was made by the Labour party candidates.

He said phone calls and entreaties were made to them through ANSAA but were ignored and the party had had several campaigns in the state without permits.

According to him, It is only fair that all politicians and political parties should be treated equally,  Labour Party cannot choose to be lawless in a society governed by laws and regulations.

“Governor Soludo has been commended as the most tolerant State Governor during this campaign period; he has even allowed Peter Obi to use government facilities for his campaign without paying any fees,” he stated.(NAN)