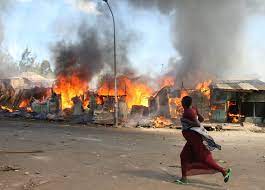 AHEAD of the 2023 general elections, stakeholders in Bauchi State have cautioned citizens against wanton  destruction of public assets and facilities during elections.

The stakeholders particularly expressed concern over the spate of violence by youths and supporters of political parties and candidates in parts of the country.

This is contained in the resolutions of the stakeholders at the end of a one-day dialogue meeting on conflict prevention mitigation on Wednesday in Bauchi.

Mr Mathias Yake, Conflict Specialist of USAID State2State, who read the recommendations, said there is no justification for destroying public facilities as economic sabotage.

Yake said the damage on facilities and destructions of Water Sanitation and Hygiene (WASH), basic education and primary healthcare service delivery, economic losses and waste of public resources was undesirable and self destructive.

He said the recommendation also focused on preventing the impact of electoral violence on service delivery in the state.

According to him, the stakeholders call on the state Ministry of Education and State Universal Basic Education Board (SUBEB) to signed accord with political parties through Independent National Electoral Commission (INEC) before using school facilities for elections.

He said the accord would commit the political parties to pay for any damages of facilities caused during elections as well conduct elections without violence.

The stakeholders also stressed the need for penalties for political parties that vandalised WASH facilities and the need for sensitisation on the dangers of violence.

Yake said the stakeholders also advocated for sensitisation of citizens and politicians on their roles during and after elections.

The News Agency of Nigeria (NAN) reports that the dialogue was organised by USAID State2State with participants drawn from government, civil society organisations and the media. (NAN)