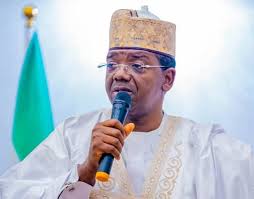 GOV. Bello Matawalle of Zamfara has given assurance of equipping the Shinkafi Ultramodern Physiotherapy Hospital if reelected for a second term.

Matawalle gave the assurance in Shinkafi, the headquarters of Shinkafi LGA during the gubernatorial campaign really of All Progressives Congress (APC) on Wednesday.

According to him, the hospital was constructed more than a decade ago, but abandoned.

He, however, said that the facility would be renovated and furnished with equipment of international standard.

“Also as part of my plans to put the hospital in use, I have sponsored many citizens of Zamfara abroad to study different medical courses,” he said.

He explained that once the hospital commenced operations, people in the state and beyond would find it very easy to consult with Doctors and get the desired service when the need arises.

The gubernatorial candidate said his first tenure was challenged by insecurity and Covid-19 pandemic, adding that in the second term, many people-oriented projects would be done in the state.

He, therefore, solicited for the support of the electorate from the area to vote for the APC at all levels in the forthcoming polls.

He added that if given another chance in the 2023 election, he would redouble effort in bringing lasting peace and security across the state.

“We have done a lot to secure lives and property of the citizens, but thank God the rate of kidnapping, cattle rustling and unwanted killings have drastically reduced, and we will continue from where we stopped” Matawalle said.

Earlier, the Director-General of the Gubernatorial Campaign Council, Sen. Tijjani Yahaya, lauded supporters for their massive turn out and orderly conduct, especially the youth.

He said if the APC returned to state and the country, it would be a blessing as all the development projects and policies would be completed.

The News Agency of Nigeria (NAN) reports that Shinkafi was the seventh local government area that the APC campaign train had so far visited.