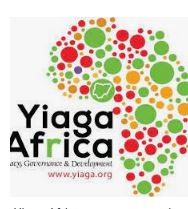 YIAGA Africa and the Not-Too-Young-To-Run Movement on Monday said it is set to organise a conference to empower Northern youth contesting in the 2023 general elections.

Mr Samson Itodo, Executive Director, Yiaga Africa in a statement in Abuja said the conference, tagged “The Convergence 4.0′, would help youth navigate the challenges of the electoral process.

Itodo  said, ”these young candidates will be able to navigate the challenges of campaigning, mobilising finances, securing stakeholder support, and managing electoral operations.

“The Convergence 4.0, which will be held in Kano from Nov. 29-30, is the largest gathering of young candidates from Northern Nigeria who are running in the 2023 elections.

“It is aimed at empowering and preparing them to run successfully in the general elections.

“The Convergence 4.0 is a space for emerging political leaders who are committed to transformational public leadership to reflect, engage, and build generational solidarity in their quest to run for elective office.

“The conference is designed to equip young people with the knowledge, skills, and networks for running effective issues-based campaigns and winning elections. ‘’

He added, ”it would feature experts drawn from academia, civil society, professional bodies, relevant tiers of government, political parties, and the diplomatic corps.”

He said that there would also be conversation-styled sessions and clinics on ideologically-driven leadership; campaign structuring, money politics; electoral laws and adjudication; electoral operations and dirty politics.

He said that the 2023 elections would be the second election cycle since the Not-Too-Young-To-Run Bill was passed into law, and expanded the space for youth political participation in Nigeria as candidates for elective offices.

Itodo said: ”The landmark law not only made it possible for young people to contest for offices they hitherto could not on account of their ages, but it also injected vigor and competition into the 2019 elections with the increase in youth aspirants and candidates.

“ Importantly, it put youth candidacy and the need for more young people in governance and decision-making as a central issue in that election cycle.

`The Not-Too-Young-To-Run movement is the leading citizens movement on political inclusion and transformative politics.

“As a movement, we believe democracy thrives where public governance is driven by individuals with capacity, competence and character.’’

Itodo, therefore, said that the group’s advocacy for inclusive politics was underpinned by a strong commitment to responsive, accountable, and innovative public leadership.

He said: “The Convergence 4.0 is supported by the Foreign, Commonwealth and Development Office (FCDO) and will be hosted with the theme, ‘Leadership, Politics and Elections’. (NAN)