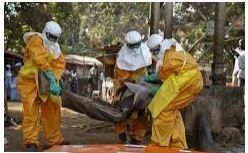 ANOTHER health worker died of Ebola on Wednesday in the western part of Uganda as the East African country grapples with the deadly disease.

Minister of Health Ruth Aceng said that Margaret Nabisubi succumbed to Ebola after battling the disease for 17 days.

Nabisubi died at a health facility in Fort Portal City in the Kabarole district.

Nabisubi’s death comes after a doctor on Saturday died of Ebola at the same health facility.

A midwife and a health assistant were probable cases because they died before they were tested, according to Aceng.

The Ministry of Health said on Sunday at least 65 health workers are under quarantine after getting in contact with Ebola cases.

The ministry data showed that as of Sunday, there had been 43 confirmed cases of Ebola, and nine deaths since the current outbreak was announced on Sept. 20 in the central Ugandan district of Mubende. (Xinhua/NAN)