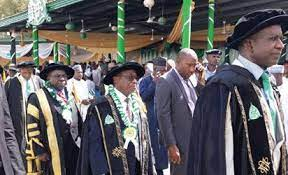 AHMADU Bello University (ABU) Zaria will present a total of 35,758 graduands for the 2018/2019 and 2019/2020 sessions for conferment of first degrees, postgraduate diplomas and higher degrees at its Diamond Jubilee Convocation.

A statement issued on Friday in Zaria  by Auwalu Umar, Director, Public Affairs of the University, said the 42nd and Diamond Jubilee Convocation was billed to hold on Jan. 28.

He said four outstanding personalities would be conferred with the institution’s honorary doctorate degrees for their immeasurable contributions to humanity.

According to Umar, the pre-convocation lecture scheduled to hold on Jan. 27 would be delivered by Mr Boss Mustapha, the Secretary to the Government of the Federation.

Umar added that the lecture was entitled: “The Impact of Man-Made and Natural Disasters on Food Security and Agricultural Development in Nigeria.”

Similarly, a lecture entitled: “Nigeria: Character Builds a Nation, Dignity Transforms It” would be delivered by an alumnus of the University, Prof. Adebayo Olukoshi, on Jan. 24. (NAN)