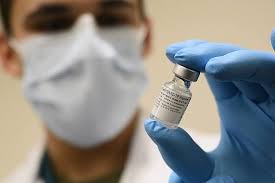 NO fewer than 905 million COVID-19 shots have been administered worldwide, according to Our World in Data (OWID).

The OWID is a scientific online publication that focuses on large global problems such as poverty, disease, hunger, climate change, and war.

OWID disclosed this on its official website handle on Tuesday.

It added there was already a stark gap between vaccination programs in different countries, with some yet to report a single dose.

“Some countries do not provide data for the number of people who have been partially or fully vaccinated.

According to it, while vaccine doses remain relatively scarce globally, most countries have focused their early vaccination efforts on priority groups like the clinically vulnerable; people in their 60s, 70s, and older; and front-line workers, like doctors and nurses.

It stated that there was also a striking divide between continents. Africa had the lowest vaccination rate of any continent, with some countries yet to start mass vaccination campaigns.

“Less wealthy countries are relying on a vaccine-sharing arrangement called Covax, which aims to provide two billion doses by the end of the year.

“83 percent of shots that have gone into arms worldwide have been administered in high- and upper-middle-income countries.

“Only 0.2 percent of doses have been administered in low-income countries,”
It stated.

It also stated that some countries may have started to administer doses, but have not yet reported data.

It noted that countries with no reported vaccinations either have not started a widespread vaccination campaign or were not regularly reporting data on the number of doses administered.

“Doses administered are plotted on a log scale. Most of the vaccines currently in use require two doses for a patient to be fully vaccinated.

“In February the U.S. Food and Drug Administration authorized a one-shot vaccine by pharmaceutical giant, Johnson & Johnson for emergency use in the United States.

The News Agency of Nigeria (NAN) reports that Nigeria has administered 1.09 million shots of the AstraZeneca.(NAN)