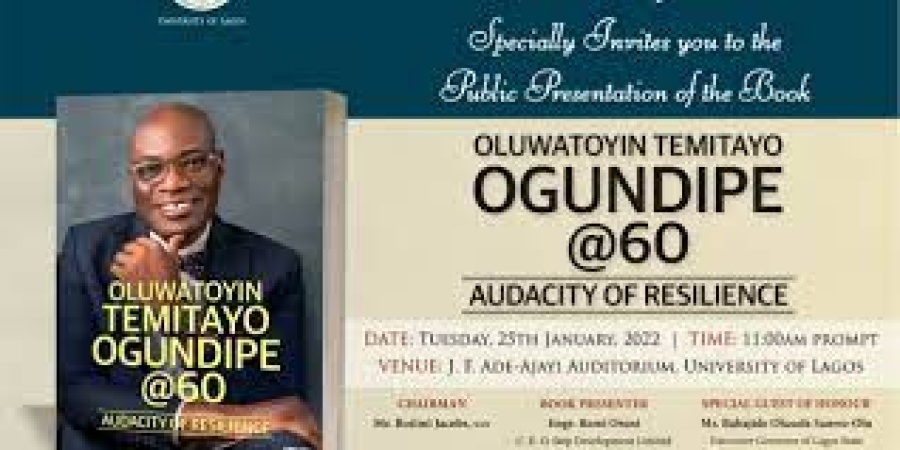 ONCE upon a time, a city boy who would rather be referred to as humble and yet “street boy” embarked on a voyage of self-discovery from a little beginning in a family of little background to arrive at the zenith of the echelon of the university.

The biographic anthology, which marks the Jubilee of Professor Oluwatoyin Temitayo Ogundipe @ 60 presents the compendium of this journey of the present day Prof. Ogundipe in 340 pages, five parts and 16 chapters; published in 2021 by the UNILAG Press and Bookshop Ltd, and edited by scholars of various disciplines led by Professor L.O. Chukwu, Deputy Vice Chancellor (Management Services) of University of Lagos. The other scholars are Falaiye Muyiwa; Ogwezzy-Ndisika, Abigail, Onuminya and Olabisi Temitope.

In “Temitayo Ogundipe @ 60: Audacity of Resilience”, you will learn a lot of inspiring things about a simple, prominent and significant man, who would rather be called “a progress in the ivory tower” by Babajide Sanwo-Olu, the governor of Lagos State, beginning from his simple and yet disciplined upbringing to his prominence, but yet to become his full potential with audacity and through resilience ‘even in the face of a dark cloud’.

The able scholars, who did justice to editing this both academic, administrative, political piece of work, which castles on four major parts, chronicles from his love and romance with nature and family life to his academic research ideology then to his administrative leadership in the university and to his ecclesiastical orientation and love for God.

The anthology takes you through Prof. Ogundipe’s providential life from his first degree where one would have predicted that he won’t go far in life with the fact that he was academically unserious and was given a course (Botany) completely different from his choice of course, Pharmacy, which he tried all to change, but couldn’t, thus, “Botanist by fate” and to the fact that he made a Second Class Honor (Lower Division), which would have naturally disfavoured him from gaining admission for Masters even before his “intelligent” peers. Meanwhile, providence would keep chasing this son of a retired soldier and bad business man and a business woman. In his Master degree, accepting the gift of fate and providence, Ogundipe dramatically changed his perspective about Botany and took it with all full heart. His doctoral programme was not an exception; Ogundipe pursued it with tenacity, commitment and dedication. No wonder he was able to rise through the academic echelon to become the 12th Vice Chancellor of the University of Lagos.

“Temitayo Ogundipe @ 60: Audacity of Resilience” also reveals to readers how this providence and fate played in his entire academic and career orientation. Losing the professor, who was to facilitate his change of course from Botany to Pharmacy at 11th hour and not being lucky enough to gain favour from his business plan on haulage, logistics, suppliers, landscaping and importation, Ogundipe chose to see it as fate and providence rather than bad luck. Perhaps, that is why Sanwo-Olu would say in the foreword, “that is the most important lesson from this book”.

This remarkable piece of literary work also takes us through the pendulum of the trajectory of Ogundipe’s career, which swung to academics, from being a lecturer 1 to being the first man in the University of Lagos. However, before he became a full Professor in 2002, he had been the Head of Department of Botany, Sub-dean of the Faculty of Science, Dean, School of Postgraduate Studies, Director of Academic Programmes, DAP, to Deputy Vice Chancellor (Academics and Research). You may say that Ogundipe was silently, but diligently led by the prophecies of Dr. Adebayo Olatunji, his undergraduate lecturer, who told him that “you will be in the university” and that of Mama Gladys Idaomi, his aunt who told him “You know what? Go and do your PhD. Don’t accept any other appointment until you finish your PhD.”

You will also learn, through “Oluwatoyin Temitope Ogundipe @ 60: Audacity of Resilience”, the unconcealed truth about the struggling phase of Prof. Ogundipe, both in his childhood days through his undergraduate stage to his masters and doctoral programme and in his position as a university professor and Vice Chancellor. Being a man, who has displayed humility in all ramification, “kekere kan, nla kan” (as he was called by the distributor of soft drink to his mother’s shop) did not withhold his early complacent attitude towards the things of God, his’ rugged ‘life in Kegite Club, his unseriousness towards his studies until his master degree level, even his challenges as an administrator in the University; one of which led to his suspension and cancellation of a convocation in the school.

In this book, you will equally see the child of providence, whose dream was changed by fate from being a pharmacist to being a botanist, how he became a quintessential researcher/scientist in this field of Botany cutting across Molecular Plant Taxonomy/Biosystematics, Forensic Botany, Cytogenetics, Ethnobotany, Paleobotany and Ecological Conservation, with numerous publications in accredited local and international academic journals and also his achievements in terms of grants, awards, fellowships and scholarships.

The editors of this iconic masterpiece truly celebrated the protagonist @ 60, who is also called OTO by some of his friends and whose parents have taught humility, which has been guiding him till his present status. This is enough a lesson to learn from the life of Prof. Oluwatoyin Temitayo Ogundipe presented in ‘Audacity of Resilience’. Therefore, this book is recommended to everyone, especially those who are or would like to be in leadership positions and those in the academic.