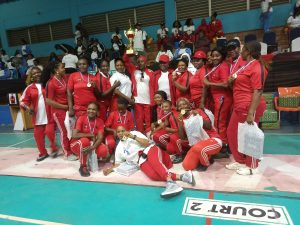 The President of NAOWA, Mrs Salamatu Yahaya and the women Handball Team during the NAOWA Fitness event in commemoration of the 2023 AFRDC on Saturday

Armed Forces Remembrance Day is celebrated on Jan. 15 every year in commemoration of the end of the Nigerian Civil war on Jan. 15 1970.

The annual event is also held to celebrate the nation’s living and fallen heroes of the World Wars 1 & 11 as well as those who paid the supreme price in line of duty in counterinsurgency and counterterrorism operations.

The armed forces of Nigeria has in the last two days organised series of sporting events to mark the 2023 celebration.

Speaking at the event, the President of NAOWA and Wife of the Chief of Army Staff, Mrs Salamatu Yahaya, said the event was organized to celebrate the nation’s fallen and living heroes who had sacrificed to keep Nigeria strong.

Yahaya said the essence of the fitness event was to re emphasise team spirit and resilience, which the fallen heroes represented.

She said the participants of the event were wives of both serving and retired military personnel as well as widows of the fallen heroes to show that they would never be forgotten.

According to her, the nation recognizes and appreciate the sacrifices of their spouses in their services to Nigeria.

“This is one way of celebrating their spouses by because when you celebrate people it shows that their services were recognizes,” she said.

NAOWA president thanked the participants for the display of team spirit and urged them to continue to display same at family level.

The News Agency of Nigeria (NAN) reports that the  event featured aerobic dance and handball competition among others.

The handball competition was between the NAOWA and Navy Officers Wives Association (NOWA) teams which was won by the NAOWA team by two goals to one.

In attendance were the President of the Police Officers Wives Association (POWA), Hajiya Hajara Alkali and representatives of NOWA and NAFOWA as well as wives of some retired senior military officers.

The winners were presented with trophies and prizes. (NAN)