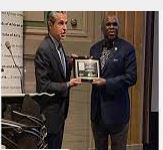 This is contained in a statement issued by Afreximbank’s media contact, Amadou Sall in Abuja on Wednesday.

Sall said Oramah received the award in Detroit, U.S., and was presented by the Friends of African and African American Art (FAAAA) of the Detroit Institute of Arts.

He said the prestigious award was bestowed on Oramah in recognition of Afreximbank’s pioneering support for Africa’s creative and cultural industries under his leadership.

“This support is exemplified by interventions such as the Afreximbank Art Programme and the Creative Africa Nexus Initiative.”

Sall said the Margaret Herz Demant African Art Award recognised individuals who had promoted and supported African art and culture through the creation of art and scholarship.

“Also through exploring its significance and history, as well as its collection, exhibiting and funding.”

While he said the award was created in 2005 as the African Art Recognition Award, it was however, renamed in 2019 in honour of Margaret Herz Demant.

“She was a major patron and benefactor of the Detroit Institute of Arts (DIA) which personal collection was gifted to the museum.”

“This is in recognition of all that he and his team have accomplished and continue to do leading the African Export-Import Bank’s groundbreaking arts programme, ” he said.

Receiving the award,  Oramah was quoted as saying “I am greatly honoured to receive this award.

“I am also pleased that Afreximbank’s extensive and ambitious programme of activities to cultivate and develop Africa’s creative and cultural industries are being acknowledged in such esteemed quarters.

“I am particularly impressed that the DIA is able to appreciate the link we are creating between Africa’s rich culture and the creative content our youth are taking to the market.” (NAN)