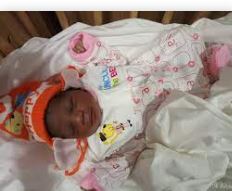 THE Nigeria Security and Civil Defence Corps (NSCDC) Anambra State Command has  begun a search for the parents or relatives of a baby abandoned in a bus in Awka.

The Public Relations Officer (PRO) of the corps in the state, Edwin Okadigbo, disclosed this in a statement issued in Awka and made available to the News Agency of Nigeria (NAN) on Tuesday.

Okadigbo stated that the baby boy, said to be about one-month-old, was abandoned in a bus by his mother on Sept. 6.

He stated that the incident happened on Zik’s Avenue/Amawbia Correctional Service, Awka at about 9am.
According to him, his mother handed him over to a corps operative, who was a co-passenger in the bus, on the pretext that she needed to ease herself.

“After about three hours wait and search, she was nowhere to be found,” Okadigbo added.
He stated that the baby was presently in the custody of the corps for safekeeping.

“The baby after necessary medical attention is kept at a place of safety, while the search for his parents and relatives continues,” he stated.

Okadigbo said that a case of abandoned child had been opened while the matter is still being investigated.

He appealed to anyone with useful information on the whereabouts of the baby’s mother, father or relatives to come to the command.