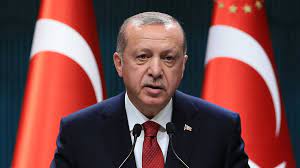 “Together with Putin, we have commissioned our Ministry of Energy and Natural Resources and the relevant Russian organisation to work together,” the Turkish leader said.

He spoke to reporters on his way back from the Kazakh capital Astana where he met Russian President Vladimir Putin.

Putin on Thursday proposed Turkey become a hub for Russian gas to third parties, including Europe, with a new pipeline and a natural gas exchange to determine prices.

“There is no delay here, now both sides will work together. Every safety precaution is also taken,” Erdoğan added.

It was not immediately clear what the size of the planned distribution centre in Turkey will be and how soon it can be built.

“Ankara needs to be able to bargain for cheaper prices for domestic use and have the right to re-export Russian gas. If these conditions are not met, we cannot talk of a hub that is feasible,” Pamir explained.

According to Pamir, Putin’s hub proposal serves Erdoğan for his domestic propaganda ahead of 2023 elections.

“For Putin, he aims at using Turkey to give a message to Europe that Moscow is not without alternatives or options for pipeline routes,” Pamir said.