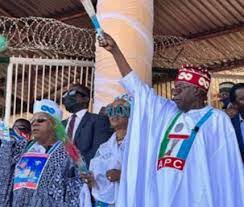 THE presidential candidate of the All Progressives Congress (APC), Asiwaju Bola Tinubu, has assured the youths that his administration will make their education and wellbeing a priority, if elected.

Tinubu gave the assurance during the APC presidential campaign rally in Umuahia, on Tuesday.

He said that the youths would play a key role in his administration and promised to make them job creators rather than job seekers.

He said that he would work very hard to put an end to their frustrations.

He said: “Youths and students, I promise you today, your frustration is over.

“None of you will spend eight years for a four-year course any longer.

“I’m greatly inspired, very encouraged, to thank you that the largest number of you are standing here since morning, this afternoon and you remain here.

“I  tell you, four years is four years because my priority will be on education.”

The presidential hopeful urged his supporters to get their PVCs, vote for APC candidates and wait to defend their votes.

He warned them not to announce the election results but wait patiently for the ones announced by INEC.

Tinubu appealed to Chief Sampson Ogah to withdraw his  suit seeking the Court’s nullification of Chief Ikechi Emenike’s governorship candidacy in his favour.

He sought to have a roundtable with Ogah, who was conspicuously absent from the rally.

He said, “Come and see me, let us discuss our matter in our living room.”

He warned them not to repeat the mistakes of the past by voting for another party.

In a speech, Emenike told Tinubu that the huge crowd at the rally was an indication that the people love him.

“Abia is your state,” he said, adding that his mission, “if elected is to save the state.

“But we must rescue it before we can develop it,” he said.

Earlier, the state Chairman of APC, Dr Kingsley Ononogbu, said that the party would work assiduously for APC to get 100 per cent victory in Abia.

Ononogbu called on the party’s national leadership to call the erring members in the state to order.

NAN reports that Tinubu was welcomed to the Umuahia Township Stadium by a teeming and cheering crowd.

The former Lagos State governor was accompanied in the campaign train by Gov. Hope Uzodinma of Imo and Coordinator, APC Presidential Campaign Council (South-East) as well as a former Speaker, House of Representatives, Mr Dimeji Bankole, amongst other party stalwarts. (NAN)