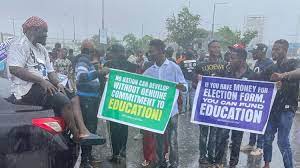 THE National Association of Nigerian Students (NANS) has suspended the protest in Lagos over the continued shutdown of Universities.

The action of the students had subjected travellers and motorists to hardship as traffic gridlock was experienced in different parts of the state.

Multiple flights were rescheduled while some passengers missed their flights on account of the blockage created by the students.

The students had earlier vowed to continue the protest today in Lagos and even extend to the seaports to demand an end to the 7-month ASUU strike.

But in a telephone interview on Tuesday, Chairman of NANS, Lagos axis, Comrade Olusesi Tolulope,  said the protest had been suspended as a result of the intervention of the Speaker of the House of Representatives, Mr. Femi Gbajabiamila.

Gbajabiamila is expected to meet the Minister of Education, Adamu Adamu, the leadership of the Academic Staff Union of Universities (ASUU) and other stakeholders over the lingering strike.

“We don’t have any plan to protest today because we want to wait for the outcome of the meeting with the Speaker of the House of Representatives, Mr. Femi Gbajabiamila,” he said.