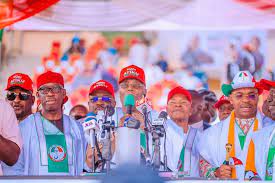 ALHAJI Atiku Abubakar on Saturday said if Kogi people would vote for him in the February Presidential poll, the Ajaokuta Steel Complex and other challenges of the people would be solved and made history.

Abubakar made the pledge while addressing a mammoth crowd at the Kogi Confluence Stadium, venue of the PDP Presidential Campaign rally in Lokoja.

The PDP Presidential Candidate, who was accompanied by his running mate, Dr Ifeayi Okowa and other PDP stalwarts in the state, described Kogi as a PDP state.

“I understand APC came and deceived you in 2015 for your votes only to be put in terrible situations. But I’m assuring you that if you vote me and PDP, you won’t regret it.

“If you vote for me this time, the comatose Ajaokuta Steel Complex and other challenges of yours will be things of the past.

“I want to assure that there will be no more salary arrears and will give jobs and businesses, to do away with idleness and suffering

“Spending months without anything doing after university graduation will be a thing of the past as we intend to invest $10 million to launch young men into enteprises/businesses, ” he assured.

Abubakar added, “we are here not to deceive you because we are serious with this campaign for your votes to enable us deliver good governance to you if you elect PDP into office this 2023.”

Asuba, however, told the crowd that he and other returnees had to leave the ruling APC because it failed to fulfill its promises to Kogi people.

“Today Kogi is faced with many challenges, which include salary arrears, poverty, insecurity and unemployment amongst others

“We want Nigeria to be rescued and moving forward again for the good of all Nigerians, ” he said.