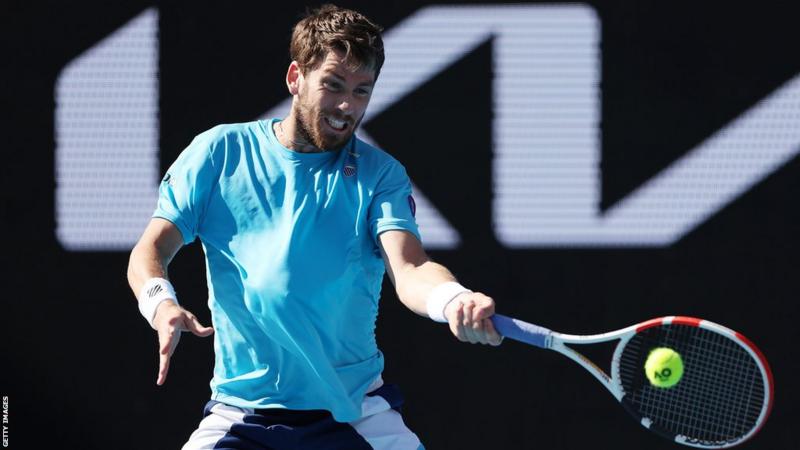 Cameron Norrie also reached the Australian Open third round in 2021

BRITISH men’s number one Cameron Norrie is out of the Australian Open after losing to rising star Jiri Lehecka.

Norrie, seeded 11th, had been aiming to knock off another notable career milestone by reaching the last 16 at Melbourne Park for the first time.

The 27-year-old left-hander was far from his best and needed treatment on his left knee early in the decider.

“I can’t really put my finger on why I wasn’t at my best, he played better than me and better in the bigger moments,” said Norrie.

“The knee did not affect the outcome of the match – it was a small niggle and I wanted to check it was nothing serious.”

Lehecka will play Canadian sixth seed Felix Auger-Aliassime in the fourth round on Sunday.

It was a measure of revenge for the 21-year-old after he was beaten by Norrie at the Auckland Open last week.

“I felt that I could beat him,” said Lehecka, who is ranked 71st in the world.

“The only thing I learned from that match [in Auckland] was to never give up and fight for every ball.”

Norrie’s exit means Andy Murray – who won his extraordinary second-round match at 04:05 local time earlier on Friday – and Dan Evans are the only British players remaining in either singles draw.

Evans plays his third round match against Russian fifth seed Andrey Rublev on Margaret Court Arena at about 13:00 local time (02:00 GMT) on Saturday.

Murray takes on Spanish 24th seed Roberto Bautista Agut in the opening match of the night session on the same court at 08:00].

Norrie has enjoyed a meteoric rise over the past few seasons after his unprecedented success on the ATP Tour, which included his first career titles and a climb into the world’s top 10.

His success has been a product of hard work and self-belief, delivering consistent performances based on relentless returning and athletic energy.

A deep run at a major had eluded him until he ticked off that achievement in style with his Wimbledon semi-final showing last year.

However, he has yet to go far in Melbourne, having lost in the first round on four of his previous five visits prior to this year’s tournament.

Norrie arrived in Australia on the eve of the year’s first major after reaching the final in Auckland, the city where the London-based player grew up.

However, he was unable to transfer his best form to Melbourne Park.

He lacked rhythm against Lehecka, with a stream of errors flowing from the forehand side, and the young Czech maintained his composure to secure one of the biggest wins of his career.

“Maybe I peaked a bit too early and couldn’t keep the momentum up but I gave myself the best preparation possible,” said Norrie, who beat Rafael Nadal at the season-opening United Cup.

“I felt great arriving in Melbourne and it was perfect preparation.

“I played a lot of matches and I really enjoyed playing in Auckland – it was very special for me. I don’t regret anything.”