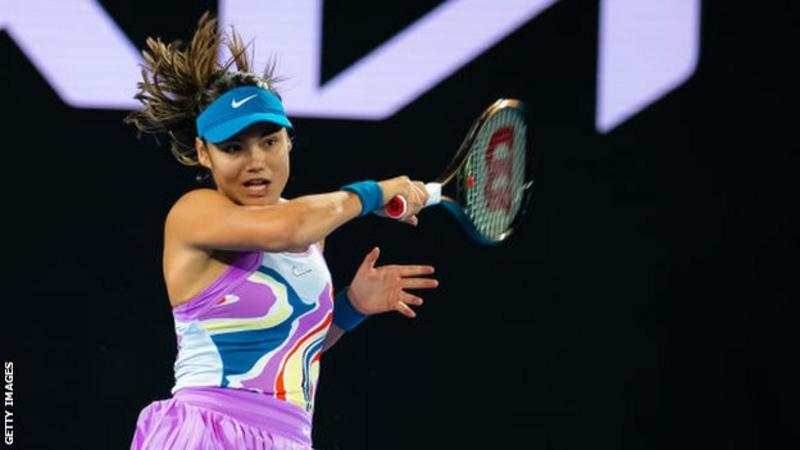 BRITISH number one Emma Raducanu is out of the Australian Open after losing in straight sets to Coco Gauff in a gripping second-round match.

Raducanu, ranked 77th in the world, acquitted herself very well against the American seventh seed but a lack of matches told in a 6-3 7-6 (7-4) defeat.

The 20-year-old had battled an ankle injury before the Melbourne major.

Defeat means Raducanu has not reached the third round of a Grand Slam since her stunning 2021 US Open win.

Had she been able to take one of two set points at 5-4 in the second – which would have forced a deciding set – it might have led to a different outcome.

Teenager Gauff, who famously reached the Wimbledon last 16 as a 15-year-old in 2019, is among the favourites to win the title at Melbourne Park.

“I told myself to hang in there, Emma played really good tennis towards the end of the match,” said 18-year-old Gauff.

Aiming for her first Grand Slam triumph, Gauff will face Chinese 29th seed Qinwen Zheng or fellow American Bernarda Pera in the third round on Friday.

Raducanu’s exit means there is no British interest left in the women’s singles, while Cameron Norrie, Andy Murray and Dan Evans are still to play their second-round matches in the men’s draw.

Norrie, seeded 11th, is scheduled to play in Wednesday’s final match on Kia Arena, but it remains to be seen if he will get chance to take to the court against French world number 65 Constant Lestienne.

A backlog of matches still to be played remains after long rain delays in Melbourne meant play on the outside courts did not start until 5pm local time (06:00 GMT).

Raducanu can take pride and positivity from performance

Raducanu conceded it has been a “great achievement” even getting on to court at Melbourne Park this week following the ankle injury she sustained in Auckland 13 days ago.

Rolling the left ankle meant she had to retire from the match against Slovakia’s Viktoria Kuzmova, leaving Raducanu in tears when she left the court.

Before her opening match against Germany’s Tamara Korpatsch, she said she “fully trusted” the ankle but her movement was always going to be tested more against Gauff.

The issue did not appear to be factor as Raducanu went toe-to-toe with the French Open finalist in a match packed with intense baseline rallies.

Raducanu grew in confidence as the match went on, playing on the front foot and pinning Gauff back with her aggressive and accurate groundstrokes.

However, her lack of court time also told with some loose shots letting Gauff off the hook at pivotal moments, including when the Briton missed those two set points by hitting a slightly-impatient backhand long and then a drop-shot into the net.

While any defeat hurts, Raducanu will undoubtedly look back on this performance with plenty of pride and positivity for the future.

The start of a long rivalry?

Eyes were instantly drawn to this potential match-up when the draw for the first Grand Slam tournament of the 2023 season was made last week – and the contest between two of the sport’s most exciting prospect did not disappoint.

True, lots of errors flowed from both racquets. But there was plenty of quality in an entertaining match which will have left many keen to see this develop into a long and enduring rivalry.

Gauff is the younger player with the greater experience, but Raducanu is the one who is already a major champion – a tag which Gauff is keen to add to her resume this season.

That is what made this match such an intriguing prospect.

Gauff warmed up for the Australian Open by winning a WTA event in Auckland and looked to be cruising towards victory when she was a set and a break up.

But doubts begin to creep into her game – particularly on her forehand side – as Raducanu rallied in the second set.

An old failing returned when a double fault provided three break chances for Raducanu at 4-3 and the American handed over the first one with an unconvincing forehand into the net.

However, Gauff showed her greater experience to regroup mentally and come through the tie-break.