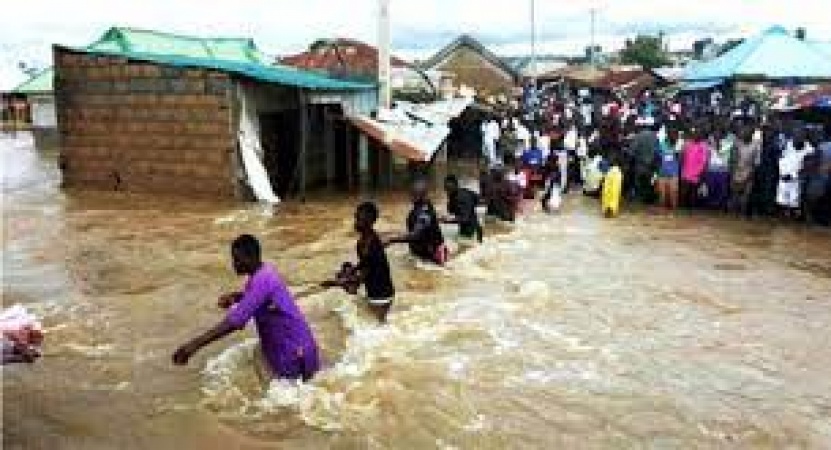 Flooding has recently become a major source of concern and a seasonal challenge in Nigeria with its attendant food shortages, displacement of persons, destruction of farmlands and properties. Residents of flood prone areas of the country should heed the warnings of the Nigeria Hydrological Services Agency to avert the devastating effects of this year’s flooding.

SOME Nigerians have surely paid dearly for their flagrant disregard of the 2020 Annual Flood Outlook, AFO, predictions, leading to the destruction of hundreds of hectares of rice farms, maize, sorghum and sugarcane plantations as well as thousands of houses, and affected about 377 LGAs in 36 states of the federation, including the Federal Capital Territory, FCT.

The 2021 flood predictions released by the Nigeria Hydrological Services Agency, NIHSA, seem to be another timely reminder of the need to be proactive and should be enough to awaken all Nigerians, especially the relevant agencies to the necessity of employing conscious efforts in the management of flood-related issues in order to avoid repeating the disasters of last year.

In October 2020, the International Federation of the Red Crescent Society, IFRC, published a report which showed that flooding, torrential rainfall, and flash floods cumulatively impacted 192,594 people across 22 states in Nigeria. In addition, it said that around 826 injuries and 155 fatalities were recorded and 24,134 people were displaced.

Suleiman Adamu, minister of water resources and rural development, during the public presentation of 2021 Annual Flood Outlook, AFO, stated that “302 local councils in 36 states, including the FCT, will fall within moderate flood risk areas, while 121 councils in 28 states are within the highly probable risk areas.”

According to the minister, the states contiguous to Rivers Niger and Benue, including Kebbi, Niger, Kwara, Adamawa, Taraba, Benue, Nassarawa and Kogi, were likely to experience river flooding. Others are Anambra, Delta, Edo, Rivers, and Bayelsa states, while coastal flooding is also expected to affect Rivers, Cross River, Bayelsa, Delta, Lagos and Ondo states. “Flash and urban floods from heavy inundation are predicted to occur in some major cities. The severity would depend on the availability and adequacy of drainage systems and adherence to urban planning regulations.

The question that readily comes to mind is ‘what are these states doing about these reports and predictions?’

The Nigerian landscape may be secured from most of the major natural hazards facing some foreign countries, but flooding seems to have recently become a serious cause of widespread destructions of lives, properties and farmlands.

Though flood is a natural environmental phenomenon, it can be greatly accelerated by human-induced activities as it is the case worldwide.

Nze said this was because Nigeria was at the receiving end of disastrous floods among the nine countries of the River Niger Basin.

Although Nze lamented that relevant authorities were frustrating the effort of the federal government by neglecting the predictions as could be seen in the results of last year’s damages, he urged the general public to take necessary measures to prevent the ugly flooding menace of the past years, and noted that there is still time for stakeholders to take steps to avert or minimize the disastrous effects of flood this year.

Nze, also, urged states and the general public to take necessary measures to prevent the ugly flooding menace of the past years, while recommending the clearing of drainage system and canals and also embark on projects for improving hydraulic conveyance of surface run-offs during peak flows, removal of refuse, weeds, water hyacinths and floats on water channels and on all avenues for river run-offs.

He also advised people living along the water-ways and those having socio-economic activities on the flood plains to relocate to safe areas before the peak of the rains; improved system for flood monitoring, flood forecasting and flood early warning.

“There must be effective and efficient operational procedure for dams and reservoirs and maintenance of other hydraulic and water infrastructure across the country as well as construction of dykes, floodwalls, buffer dams, detention basins and water retaining structures.

“There must be enforcement of Town Planning Code of Conduct in the country to allow for the construction of houses and drainage structures as outlined by Town planners and constantly freeing the waterways from obstructions and provision of adequate refuse dumping facilities among others,” he said.

The NIHSA on its own part stated that its main strategy to minimise the destruction caused by annual flooding is for the 36 States and the FCT authority to create retention basins for harvesting floodwaters downstream of major rivers where there is a scarcity of groundwater thereby using the floodwaters for possible groundwater recharge and other uses. By so doing, the fresh floodwater will not be lost to the sea to become saline water.

The agency also advised the state governments to pull down structures built on flood plains and expand the drainages for easy flow of water as one of the strategies mapped out.

Many states and stakeholders have begun to wake up to this challenge, while some still remain unfazed by the threats of imminent destruction.

For instance, the Oyo State Government, in an effort to curb the menace of flood has restated its commitment to the timely completion of the ‘World Bank-Assisted” Ibadan Urban Flood Management Project, IUFMP.

Seyi Makinde, the state governor, said this in a statement issued on Wednesday, August 11, 2021 in Ibadan through his Chief Press Secretary, Taiwo Adisa, that the World Bank should not withdraw its “conditional no objection” for the Second Pool of Long Term Investments, PLTI2, BERs, and make available funding for the contracts. The project is expected to be completed by post-June 2022.

As many residents affected by the flood in Ekiti state have already begun to relocate to Ado Ekiti as Sunday Adebunmi, the chairman of the State Emergency Management Agency, SEMA, said that the state government would swing into action by dredging the river and channeling the drainage systems in the community.

The Olukere of Ikere Ekiti, Oba Ganiyu Obasanyin, also appealed to the state government to come to the aid of the community and cautioned the residents against dumping refuse into the drains, according to the report by the News Agency of Nigeria, NAN.

In 2020, the Lagos state government through its commissioner for environment and water resources, Tunji Bello, said that it had established pumping stations in some parts of the state as steps towards mitigating against the negative effects of annual flooding.

He stressed that the state was already experimenting the use of pump stations at Ilubirin in Lagos Island.

According to him, the pumping stations are parts of new multifarious efforts by the state government to ensure that the heavy rainfalls expected to resume in September and cause flash flood will have minimal effect on residents.

Kunle Adeshina, director of public affairs of the ministry of environment and water resources of Lagos state, disclosed that in 2020 the state government commenced the construction and concrete lining of the 9km Akinola/Aboru drainage channel.

Adeshina stated that the construction, which would be completed within 24 months, would permanently solve the Aboru flooding problem.

Local media reports quoted Adeshina as saying that apart from the Akinola/Aboru channel, that the ministry has commenced work in other areas.

In Anambra State, various groups have continued to call on the government to expedite action on the dredging of the River Niger.

The call was made by Evidence and Collaboration for Inclusive Development, ECID, a United Kingdom, UK- funded project for development; Justice Development and Peace Caritas, JDPC, Onitsha; Hope Givers Initiative, HOG-I;  and Civil Rights Concern, CRC, during a joint press briefing at the Basilica of the Most Holy Trinity Secretariat, Onitsha, Anambra State in 2020.

“The groups specifically said that only the dredging of the River Niger will stop the perennial flooding that sacks thousands of currently displaced riverine communities in Anambra State, particularly communities in Ogbaru and Ayamelum Local Government Areas in Anambra North Senatorial zone.

In a press statement entitled “Agenda setting on Flood Menace Mitigation in Anambra State Riverine Communities” signed by Nwoye for ECID/JDPC Onitsha; Okey Onyeka for CRC and Onyeka Udegbunam for HOG, Nwoye regretted that “Flood has continued to ravage Anambra communities, particularly, the Anambra North senatorial zone communities since 2011 because the federal government failed to take proactive measures to address the problem of flooding in the area.

According to him, all the promises made to the people during the 2012 flooding were not kept by the federal government in spite of the repeated calls by organizations and individuals for the promises to be fulfilled.

They urged the federal government to expedite action on total dredging of the River Niger and the Anambra State government to commence the dredging of surrounding rivers like Anambra and Ezu rivers in order to deepen water depth and minimize overflowing of river levels during rainy season.

While the NIHSA continues to warn the flood-prone states of the country to take necessary actions to avert the effects of flooding this year, Taraba State on August 5, 2021, experienced one of the worst floodings in the state.

According to local media reports, many parts of Taraba state, especially the river belt areas were affected and the residents of Jalingo, the state capital were not left out of the tragedy.

The resident also said that the August 5 incident was the second time in less than one month that the communities would be ravaged by high waters, with valuables worth millions of naira destroyed, including buildings, farmlands and vehicles.

Darius Ishaku, the governor of Taraba state said that the flooding was caused by people who have encroached on the river valleys in the state and that the way out of the problem was to discourage people from settling in the valleys and relocate to higher grounds.

Speaking after the flood disaster in the state, Gov. Ishaku said: The first thing is to immediately send food supplies to all these people because most of them, their houses have been completely damaged.

“We need to support them with what to eat immediately and the second stage will be how they can reconstruct their houses, but not in the same area because they are all in the low valley of the rivers.

“Any flooding again in the future will be worse. We had this issue in 2005 and this looks a bit worse than that.”

This ugly experience in Taraba state will no doubt send a warning signal to the flood prone states to urgently take precautionary steps to avert more devastating disasters this year. The residents in these flood prone areas are expected to leave the low land and low valley areas immediately in line with the directives of the NIHSA.