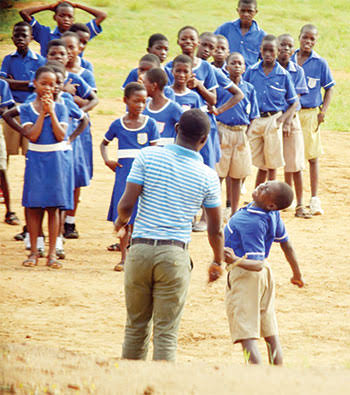 Apart from the issue of poor funding of education, another important reason for the drop in the standard of education, especially in the primary and secondary schools has been the absence of a clear disciplinary system, which had played an important role in the successes achieved in the education sector some decades ago.

FOR some Nigerian elites, it is now a case of “spare the rod and spoil the child”. Unfortunately, the old practice of punishing a child for flouting or disobeying instructions has been banished. And what we have today is not African nor Nigerian since corporal punishment is known to be part of the African method of socialization. For instance, some customary courts in the country are known to prescribe one form of corporal punishment or another for offenders, like a number of strokes of the cane.

During the socialization process of a child, the teacher and the school system play crucial roles since the child stays longer hours in school than at home, the teacher therefore plays more roles than the parents of the child. However, in playing this role, the use of corporal punishment is often necessary in order to have a well molded child.

The blame has been heaped on the new policy which has banned the use of corporal punishment in both federal, some state, and mostly in private owned  schools.  According to Omang Julius, vice-principal of Tophill Schools Abuja, the federal ministry of education and most schools have completely stopped corporal punishment.

However, Ben Goong, the spokesperson for the education ministry explained that the ministry has not banned corporal punishment in schools. ‘’Hon Chukwuemeka Nwajiuba the minister of state for education had only warned that bullying would no longer be tolerated in schools. This is because senior students might want to bully the junior ones’’ he said.  But studies have shown that teachers are fast losing the right to discipline pupils and students. Almost all forms of punishment in the form of discipline as we know them to be are now regarded as abuse of the child.

For instance, in Lagos state a teacher can lose his/her job for punishing a student. The state government frowns at corporal punishment and regards any form of discipline, including corporal or verbal as abuse of the child. The right to punish an erring pupil or student is now the sole responsibility of the school management. The classroom teacher can only report the child or student to the school management which then decides the appropriate punishment to be given.

Although some stakeholders see this approach as a way of checking the reckless activities of some teachers, it has however become a breeding ground for disrespectful and unruly behaviors in schools.

Speaking on this development, some teachers and parents have expressed divergent views.

For  Stella Olateye, head teacher in Omoleye Elementary school, the fear of discipline was enough to make children listen in class. “They no longer listen,” she said.

Loveth Emeka believes that no teacher has the right to beat her children. According to her, the right  to discipline her children is her sole responsibility.

But Kayode Obisessan, a mother of two, thinks that “teachers should have the right to discipline children, but must not leave any marks on their body”.

Omang Julius, a vice principal believes “schools are embracing this principle, because punishment scares pupils away.”

For a school owner, Olojido  Oluwatobi,  ‘children must be handled with care, while some may need to be punished, some others need to be pampered, It is therefore the duty of the teacher to apply the right approach,” she said.

Both parents and teachers believe that child discipline is crucial in proper up- bringing of any child.  ‘So when we embrace institutionalized policies that preach child rights at the expense of discipline, we end up raising children who will become a nuisance to the societies,’ one of the parents said, adding that the high crime rate among the youth is traceable to the absence of discipline in schools and the ban of corporal punishment.

In addition, a study conducted by Sigman, a fellow of the Royal Society of Medicine, reveals that ‘’nursery age children are becoming increasingly violent and disrespectful towards teachers, and parent battering is on the rise’’.

This, according to him, is caused by an attempt to empower children and lack of discipline in the classrooms.

He noted that Britain now has the highest rate of child depression, child-on-child murder, underage pregnancy, obesity, violence and antisocial behavior and pre-teen alcoholism. His report; THE  SPOILT  GENERATION  shows that  these are the result of lack of discipline.

Annie Holmquist, the editor of Intellectual Takeout, believes that the kinder, gentler, ‘’let-me-be your friend approach’’ to parenting is the major cause of the lack of discipline among teenagers today.

Although we commend the efforts of the government at finding better education policies, it must not be at the expense of a better future generation.

While there are globally accepted child rights act of which Nigeria is a party to, we must realize that there are no universality in dealing with children. Governments at all levels must endeavor to come up with policies that are not at variance with the society’s peculiarity.