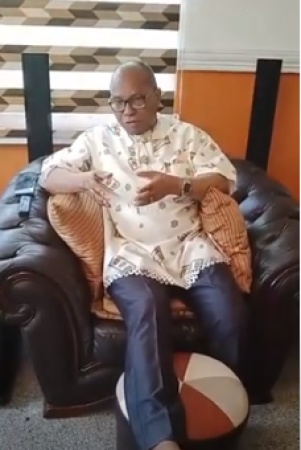 PROF. Anya O. Anya, has said that bandits are running riot in Nigeria because they haven’t met any form of resistance from the military due to the selfishness of the political leaders.

The octogenarian, who was the founding Director-General of the Nigerian Economic Summit Group, expressed worry over the state of the nation and the attitude of leaders and noted that in many ways, the country is on auto pilot.

Speaking to Realnews in an exclusive interview in Lagos, Anya said that the government was running on its own.

“Where we are now, I don’t think we have a country. When you look at the way things are going, there is no point pretending, we are just managing to give the semblance of governance and so on,” he said.

According to him, the bandits who thought there would be more resistance to their attacks have discovered that there is little or nothing stopping them.

“Each time they move forward, there is no resistance. So their own ambition has now grown, they now think that they have the country to do whatever they please.

He described insecurity in the country as a national disaster since the last five years and would continue to go worse if no drastic measures are taken.

“Go back to your records, you will find that what you had was an episodic situation. Occasionally, this will happen, and occasionally, that will happen. If you have a serious government, they can take charge. But we now have where everything is happening everywhere on a daily basis. So you do not have the place you can stand on to stabilize and from there expand.

He added that although the north is the worst hit, the north cannot solve the problem without the help of the other parts of Nigeria.

“I turned 85years in January, I have never seen this country as it is and it is difficult to predict what will happen, and we have never been in this kind of situation.

“Most of the important people, including Sokoto, they don’t live in their states any longer, they operate from Abuja. But now, which is what the then governor of Niger state was drawing attention to, what is happening now is that Abuja itself could easily be threatened. That is what the governor of Niger state said. Before, it was far away. now, it is within two hours drive into Abuja.

“What has happened with the train bombing is a completely new dimension, up till the day it happened, would anybody had believed if he was told that it would happen,” he said.

Anya therefore advised the government to begin the process of reorganising the military by recalling retired military generals, who still have a national inclination, who will genuinely stand without bias.

“By calling in the whole military, they can be pockets of resistance, organised resistance to start with, then perhaps, they (the bandits) themselves will start paying a high price for trying to occupy the country, and that is the point at which they decide whether to go back to where they came from, or to fight it out,” he added.

According to him, if the country is properly organised, non-state actors will not be able to take over, or overrun the country.