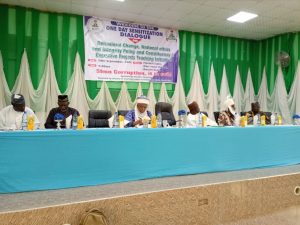 At the sensitisation dialogue for stakeholder on projects tracking

ALHAJI Nuhu Zaki, Bauchi State Commissioner for Local Government and Chieftaincy Affairs, says that good governance will curb the menace of corruption in the society.

He said traditional and religious leaders should be provided with a conducive environment and logistics to hold their subjects responsible and fight unacceptable practices.

In his speech, the Chairman of ICPC, Prof. Bolaji Owasanoye, told participants to see themselves as character-molders, and champions of integrity that had crucial roles in community development.

Owasanoye, represented by the North – East board member, Dr Solomon Mandama said that the Constituency and Executive Project Tracking Initiative revealed the extent of which corruption had short – changed Nigerians.

“The design and Implementation of National Ethics and Integrity Policy recognises you as critical stakeholders, if the promotion of the policy is to be successful.

“You will listen to revelations from constituency and executive projects embarked upon by ICPC since 2019 that perhaps will shock you.

“These revelations, I believe, will underscore why every core values and ethics and integrity policy should be imbibed, practised and upheld by all,” he said.

Owasanoye urged leaders in the society to partner with ICPC in diminishing corruption and using good office to procure values and behavioral change.

On the role of traditional and religious leaders in advancing core values, national ethics and integrity for behavioral change, Gali said leaders should create a community platform to discuss the policy contents.

Participants at the occasion included, traditional rulers, religious leaders and civil society organisations in the state.

The sensitisation exercise was with the support of Mac Arthur Foundation, National Orientation Agency and the state Ministry of Local Government and Chieftaincy Affairs. (NAN)