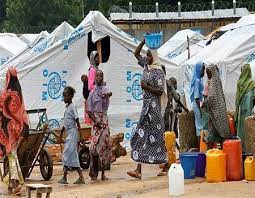 A cross section of Benue Internally Displaced Persons (IDPs) on Wednesday commended the  Benue Government and donor agencies for the continuous support to them in spite of the hash economic situation in the country.

The IDPs who spoke to the News Agency of Nigeria (NAN), commended the Federal and Benue State Governments for their various support over the years.

They said though they were still in the camps and facing numerous challenges, they still thanked God and commended those who continuously remembered them.

They said the State Government distributed relief materials to them monthly.

NAN reports that the Executive Secretary, Benue State Emergency Management Agency (SEMA), Dr Emmanuel Shior, had said the state had over two milliion IDPs due to herders’ attacks and flood.

NAN further reports that the state has over 10 official camps across Guma, Makurdi, Logo, Agatu, Okpokwu, Gwer-West LGAs while many others were staying with people in the host communities where the camps are located.

At the Abagena IDPs Camp in Makurdi, Mama Mercy Igbawua, 69, commended the government, NEMA, donor agencies and individuals for their continuous support.

Mama Igbawua said that following the attack on her community close to Udei in Guma Local Government Area in 2017, she ran to the camp for safety.

According to Igbawua, the camp has become her home for the past five years adding that she lived and survived with the support from government, donor agencies and individuals.

She admitted that though they were to some extent, well taken care of, life at the camp was completely different from the outside.

Recalling the day of the attack, she said everything happened like a movie but it was true.

“I am from Udei axis from Guma LGA. I ran to the camp for safety in 2017 when the attackers took us by surprise.

“At first I thought it was hunters testing their guns. Then I saw people running while some were shouting and crying. Being this old, I was assisted by someone whom I cannot remember,” she said.

She said she was very thankful of the assistance they were receiving from government, NEMA, donor agencies, NGOs and individuals.

Also Mr Daniel Terwase, 33, another victim,  commended the government and organizations for their support to them.

He appealed to government for resettlement.

“My brother, we are tired of life in the camp but we don’t have any other alternative at the moment. NEMA, Benue Government and organizations are helping us with food and non food materials but there is no place like home.