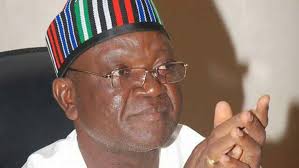 BENUE State governor, Samuel Ortom, has urged the federal government to include the state on the list of beneficiaries from the 13 per cent derivation revenue funds as a solid mineral-producing state.

He made the remarks before the commencement of the State Executive Council meeting at the Government House in Makurdi.

He acknowledged that Benue State had abundant mineral resources such as cement, zinc as well as gold, which he pointed out were recently discovered in large quantities in Kwande Local Government Area of the state.

The governor, therefore, stressed the need for the state to be designated a non-oil producing state to also derive maximum benefits from its natural resources.

He said the Benue State government would equally secure a license from the federal government to regulate mining activities within its territory, directing the commissioner for lands, survey and solid minerals to facilitate the process of acquiring the license.

Ortom added that exploration of more mineral resources within the state had already commenced which he said would boost the internally generated revenue profile of the state.