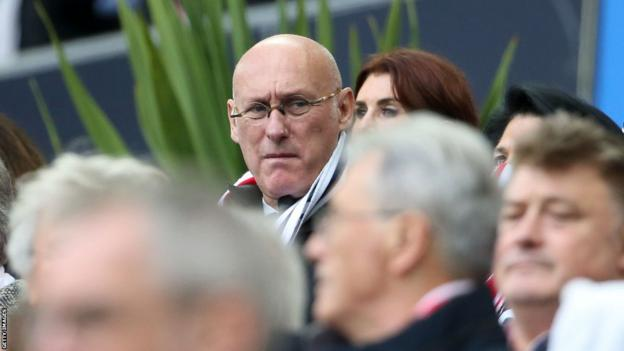 FRENCH rugby president Bernard Laporte was released without charge after being detained by police on Tuesday as part of a tax fraud investigation.

“It is a case in which he is implicated for having been associated with rugby friends a long time ago,” lawyer Jean-Pierre Versini-Campinchi told AFP.

“He has neither been accused of having defrauded nor of having received any money.”

In December, Laporte stepped back from his role as president of the French Rugby Federation without resigning after being handed a two-year suspended prison sentence and a 75,000 euro (£64,000) fine for corruption, imposed nine months before France host the World Cup.

Hours after the verdict, he also stepped down as vice-chair of World Rugby.

Laporte was also banned from holding rugby positions for two years, but that is suspended pending an expected appeal.

Nearly 2,000 French rugby clubs are voting whether to accept the appointment of interim president Patrick Buisson – who was given the post by Laporte – with results expected on Thursday.

“He was summoned for questioning by tax authorities, he went there with a lawyer specialising in tax,” Versini-Campinchi told French news agency AFP.

“It is perfectly scandalous that the prosecutors have chosen the date of Patrick Buisson’s election for the questioning and that the disclosure of this questioning was made on the same day,” he added.

According to AFP, the court ruled that Laporte had showed favouritism in choosing France’s shirt sponsor.

Altrad was given an 18-month suspended sentence and 50,000 euro (£42,800) fine. Both men deny any wrongdoing, and Altrad’s lawyer said he would study the decision before deciding whether to appeal against it.

In February 2017, Laporte signed a 180,000 euro (£154,000) deal with Altrad group for his image reproduction rights. Prosecutors claim Laporte did not deliver the services paid for.

In November, financial prosecutors searched the headquarters of France’s 2023 Rugby World Cup organisers as part of a government inquiry into the management of the organising committee.