Realnews Magazine
Home Books Book Launch on “How the Yoruba Fought and Lost the Biafra-Nigeria Civil...

A NEW book, “How and Why the Yoruba Fought and Lost the Biafra-Nigeria Civil War’’ written by Dr Jimanze Ego-Alowes will be officially presented on the 20th October, 2016, at the Best Western Starfire Hotel, 128 Joel Ogunnaike GRA Ikeja.

The book, which focuses on the roles the regions and their lead personages played in the events of and leading to the civil war, has been dubbed as “controversial”, with a potential to becoming the book of the year 2016.

The book re-evaluates the roles of major characters in the war and the events that followed, including Generals Chukwuemeka Odimegwu Ojukwu, Yakubu Gowon, Obafemi Awolowo, Professors Wole Soyinka, Ben Nwabueze, amongst others. The consensus amongst previewers is that this is a brave new reinterpretation of our history in the light of strict logic and universally accepted axioms.

Jimanze is the author of several books including the “Minorities as Competitive Overlords” which has been critically well received as a major to contribution knowledge across the several disciplines of sociology, economics and history.

Jimanze writes a popular and well-received column, The Turf Game for the Daily Sun newspapers. In the words of the author the purpose of the book is to awaken Nigerians to the need of “never finishing the tale”. “No great narrative’’ in his words, “has an end”. “History never finishes.”

Narrative Landscape Press releases Danfo Driver in All of Us 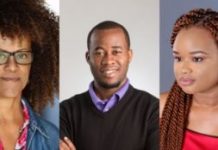 27th meeting of the ECOWAS Administration and Finance Committee commences