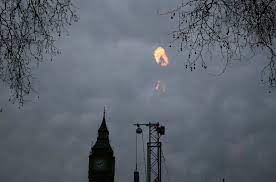 BRITAIN on Thursday formally lifted a moratorium on fracking for shale gas that had been in place since 2019, saying strengthening the country’s energy supply was an “absolute priority”.

Energy prices had soared in Europe after Russia invaded Ukraine, and Britain was subsidising bills for households and businesses at a predicted cost of more than 100 billion pounds ($113 billion).

Earlier, Prime Minister Liz Truss said that fracking extracting shale gas from rocks by breaking them up would be allowed where it was supported by communities.

Business and Energy Secretary Jacob Rees-Mogg further said on that all sources of energy needed to be explored to increase domestic production.

“It’s right that we’ve lifted the pause to realise any potential sources of domestic gas”.

Fracking, which had been opposed by environmental groups and some local communities, was banned after the industry regulator said it was not possible to predict the magnitude of earthquakes it might trigger.

Cuadrilla, 96 per cent owned by Australia’s AJ Lucas (AJL.AX), had the most advanced fracking wells in Britain.

It found a natural gas resource, but the rules around earth tremors meant its operations had to keep halting, meaning that neither of its two wells could be fully flow-tested.

The largest tremor caused by fracking took place at its site in Blackpool, northern England, in 2011, registering a magnitude of 2.3 which residents said woke them in the night.

After the tremor, the government introduced a traffic-light system which suspended work if seismic activity of 0.5 or above on the Richter scale was detected.

This was a level scientists said would need to be increased if Britain was to develop a fracking industry.

Experts said fracking would do nothing to ease energy prices this winter since it would take many years for an industry to develop.

Experts added that it remained unclear whether a significant amount of gas could ever be extracted in this way in Britain.

A review of acceptable levels of seismic activity published on Thursday said the scale of exploration to date meant understanding of the risks was limited.

Ending the ban would allow drilling to restart and more data to be gathered, building an understanding of how shale gas could be safely extracted where there was local support, the government said.

It also confirmed its support for a new oil and gas licensing round, expected to be launched by the North Sea Transition Authority (NSTA) in early October.