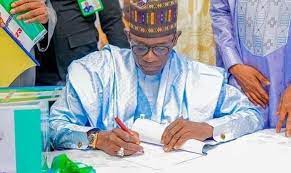 GOV. Mai Mala Buni of Yobe has approved 35 per cent subsidy for shops and stalls in the newly commissioned modern markets, to boost business activities.

This is contained in a statement signed by Buni’s Director Press and Media Affairs, Alhaji Mamman Mohammed in Damaturu.

The director  said the reduction in prices of the shops became necessary to support and encourage traders to operate in the new markets for business to thrive.