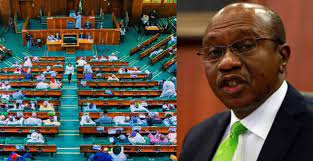 THE Central Bank of Nigeria (CBN) on Friday offered explanation to Senate Committee on Banking, Insurance and other Financial Institutions on need for the cashless policy, limiting cash withdrawal for individuals at N100,000 and Corporate Bodies N500,000 per week.

The policy, as explained by Deputy Governor of CBN on Financial System Stability, Mrs Aishat Ahmad, was introduced in 2012 during former President Goodluck Jonathan ‘s administration and extended to Abuja and six other states in 2013 .

The CBN deputy governor made the explanation during her screening  and  her  counterparts on Corporate Services, Edward Lametek Adamu, for re – appointments as deputy governors.

She said cashless policy, as fully implemented by CBN now, was not new as required steps was taken in 2012 with Lagos State as pilot scheme and Abuja and six other states in 2013 .

She explained that though full implementation of the policy had not been carried out by CBN since then, saying that the introduction then, brought a lot of transformation in the banking and payment system .

” Distinguished Chairman of this committee and members, I ‘m happy for the opportunity given to make presentations on planned N100,000 withdraw limit for individuals and N500, 000 for Corporate Bodies per week beginning from Jan. 9, 2023 in line with cashless policy introduced in 2012 .

” Based on information available to CBN, the time for full implementation of the policy with proposed limit on cash withdrawals per week is now .

” Required infrastructure for its implementation in terms of financial access point system, mobile money, e – naira etc are available across the 774 local government councils in the country .

” All fears and worries being expressed by Nigerians on the planned limited cash withdrawal policy are seriously being taken care of as nobody or section of Nigerians will be left out .

” In the past, banking transactions in Nigeria were limited to Bank Branches alone as the only means which had now expanded into multiple electronic platforms as well as geometrical increase in the number of agents from 88,000 to 1.4 million,” she said.

She, however, said that the CBN was flexible and would be ready to accommodate opinions that won’t make the policy challenging to any category of Nigerians during implementation .

After her presentation , the Chairman of the Committee, Sen. Uba Sani ( APC -Kaduna) asked the two nominees to take a bow and go as moved by the Whip of the Senate, Sen. Orji Uzor Kalu (APC-Abia) and seconded by Sen. Danjuma Goje (APC-Gombe).

Uba said: ” With presentation made by the Deputy Governor of CBN on Financial System Stability , Aisha Ndanusa Ahmad on the planned limited cash withdrawal, required information on the merits of the policy has been given and will be communicated to the Senate in plenary through our report .

” The two deputy governors, having earlier been screened before serving their first tenures, need not to again as unanimously agreed by members of the Committee ,” he said.(NAN)