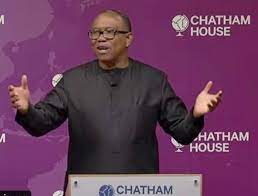 PETER Obi, the presidential candidate of the Labour Party has assured that the Central Bank of Nigeria. CBN, will maintain its independence if elected as President of Nigeria.

Obi, who was speaking at the Chatham House interactive session in London made this declaration while responding to questions on his view on Central Bank’s independence as a tool to instill economic growth and how he will restructure the external debt without downgrading the country’s rating.

“Let me assure you, the Central Bank will maintain its independence, it will be respected,” he said.

According to him, the economic problem of the country is not unique as a result of the person in position as the CBN governor.

He noted that replacing the CBN governor and putting someone else on the same level of fiscal rascality, which is fueling the nation’s inflation and affecting the rate of exchange, will not solve the problem.

“These are some of the things you need to cut. As long as the government continues on that fiscal rascality, that situation will reoccur. That is what we need to fix,” he said.

While speaking on the way to service debt, Obi underlined that Nigeria is not the first country to pass through a similar situation; however, he noted that the problem with Nigeria is that it is not producing, but rather consuming.

“Our inability to service our debt is because of fiscal rascality, to pay unsustainable subsidies, which will be stopped from day one because it is a criminal thing,’’ he said.

Peter Obi also stated that his government will tackle the rate of oil theft in the country. According to him, oil theft and corruption are also threatening the government’s ability to service its debt.

“You are no longer generating money because you have people who are stealing our oil and the only people who can steal oil are people in government because ordinary people cannot steal oil; you can’t put it in your pocket,” Obi said.

He added that he would stop corruption and waste in governance while ensuring that the revenues of the government are properly collected.

“When you have tightened all the leakages and waste, you will be able to increase your position and renegotiate and be able to service your debt,” he added.

He recalled that Nigeria was sanctioned because of its inability to meet up its quota in oil production.

He said: “Nigeria is today the only known OPEC nation, apart from Venezuela that was sanctioned, that is not meeting up its quota

“This is because over the years of oil theft, multinationals have not been investing, coupled with waste; you are not realizing what you are supposed to.

“Every other nation that is in the same commission was able to bring down their rate and inflation within this period of the Ukraine war.

“I am not saying that it is good to wait for war to be able to get more revenue, but people are taking advantage of it because it is there and we can’t run away from it, but we couldn’t take that advantage and inflation got to us because of poor management of our own fiscal space.”