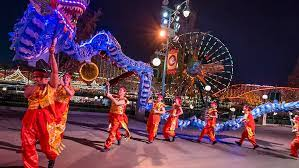 THE annual celebrations of the Lunar New Year in Chinatown of Lower Manhattan, New York City, attracted a big crowd from the Chinese community and other ethnic groups on Sunday.

As the 25th annual festival in celebration of the Lunar New Year, the two-hour-long event was staged in Sara D. Roosevelt Park at Grand Street and hosted by Better Chinatown USA.

A volunteer-based organisation dedicated this to the improvement of New York City’s Chinatown.

Basketball courts and playgrounds in the park, as well as sidewalks around it, were packed with people.

Loudspeakers and two giant lanterns at the entrance of the park made the celebrations heard and visible from afar.

Adams, who was in traditional Chinese costumes at the event, also delivered a video message on his social media account to celebrate the Year of the Rabbit.

Emily, an African American who wears traditional Chinese costumes for the occasion, said she travelled for one and a half hours from New Jersey to participate in the festival for the first time.

In her last year of high school, Emily said, she was learning Chinese by herself and trying to write Chinese characters every day.

She extended wishes for the Lunar New Year in Chinese.

Smagula, who has been studying Chinese since 1988 and had lived in China for about 10 years, said the festival demonstrated a spirit of unity and harmony.

It allowed people from various ethnic groups to celebrate the Lunar New Year together.

“It’s a good sign that many people linger on after the scheduled celebrations concluded. I hope today will be a turning point enabling more sharing among people,’’ said Smagula.

He also expressed the hope that his role as a co-host in the celebrations could encourage the youth to learn Chinese and take a dip into Chinese culture.

Some young people from other ethnic groups joined the dragon dance performers in a spirit of integration and solidarity.

Chinatown in Lower Manhattan has a history dating back to the 19th century and is home to around 100,000 residents.

It’s seen as an attraction among tourists.

A number of stores in Chinatown remained open on Sunday, which marked the start of the Year of the Rabbit, and many visitors purchased decorations or gifts for the Lunar New Year there.

Meanwhile, scores of artists and volunteers in New York City handed out thousands of calligraphy works of the Chinese character “Fu,’’ meaning fortune and luck in English.

Moreover, a number of celebration activities are scheduled in the coming days at museums, music halls, parks and other venues in New York City. (NAN)