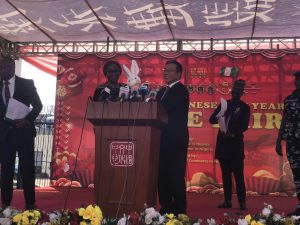 THE Chinese Government through its Embassy, Cultural Center and Chambers of Commerce, has reiterated its commitment to strengthening bilateral cooperation and fostering people-to-people relations with Nigeria in 2023.

Amb. Cui Jianchun, the Chinese envoy to Nigeria, said this on Saturday in Abuja during a temple fair organised to mark the upcoming Chinese Lunar New Year which falls on Jan. 22.

According to Cui, as China marks the beginning of a Lunar new year, the Chinese government will rededicate itself  to ensuring that the diplomatic relations between both countries is further strengthened in 2023, especially with the coming election.

“We have a big vision for the two countries in the coming Lunar new year.

“In 2022 we had a lot of infrastructural development including the deep sea port railway, highway, airport , hydropower plant, ICT, agricultural and also industries in different states.

“I am confident that bigger things will happen in the year 2023, one of which is the general elections, which is the biggest event in Nigeria and also for China because we are partners.

“This means that the people there are happy. So this is not only about culture, it is really about how we, from different cultures, can work together.

“In today’s event we had Chinese and Nigerian dancing on one stage. It means that we can dance together and I’m very moved by it.

“This is a good harmony, a good symphony, and I believe in the coming years if we work together this way for the Chinese and Nigerians, we can make a big difference, ” he said.

Mrs Lydia Jafiya, Permanent Secretary in  the Federal Ministry of Information and Culture, while congratulating the Chinese community, acknowledged that China has  advanced people-to-people contact with Nigerians.

“I congratulate the Government of the People’s Republic of China, the Chinese embassy and community in Nigeria and hope for a fruitful 2023 as well as for a remarkably stronger cooperation geared toward improving the economy of both countries.

“I wish to also express appreciation to the Chinese ambassador for the strong  cultural relations between Nigeria and China established through countless cultural exchanges, especially in capacity building.

“According to 2023 Chinese Zodiac rule, the year 2023 Chinese New Year has been predicted as “THE YEAR OF HOPE” also known as “The Year of Water Rabbit” which signifies longevity, peace, and prosperity in Chinese culture.

“I believe that this will be a year of hope for the two countries and we will be clever, swift, and prudent like the rabbit,” Jafiya said.

Sen. Adamu Mohammed, Chairman of the Senate Committee on Foreign Affairs, represented by Baba Abu Baker, SA to the Senator, congratulated China on its spring festival.

“The New Year celebrations are symbolic of the cultural tradition, heritage, and aesthetic aspirations of the Chinese nation, abounding in distinctive Chinese symbols of great emotional appeal.

“The ambassador has started a good work and if we continue in this direction then it will definitely happen,” he said. (NAN)