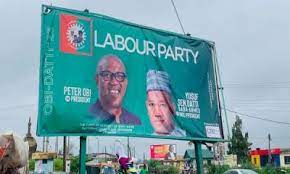 THE Civil Liberties Organization CLO Anambra State branch has called on Soludo administration as beneficiary of democratic process to ensure level playing ground for all candidates and political parties aspiring for various elective offices in the state, which is the beauty and ingredients of participatory democracy.

CLO made the remarks in reaction and condemnation of purported dismantling and destruction of Labour Party billboard in Awka.

According to Professor Wole Soyinka, absence of criticism and strong opposition, intolerance are great threats to democracy and democratic culture.

It will be recall that prior to the commencement of electioneering campaigns, the CLO had called on political gladiators to play the game according to the rules and respect the views and interests of the opponents.

Anambra is known for politics of maturity, mutual respect and without bitterness and rancour. Pertinently relentless and concerted efforts should be made by all political leaders, candidates and parties to ensure love, peace, unity, tolerance and tranquility before, during and after the elections.

“We patriotically appeal to Anambra State government, for interest of peace, respect and honour to former governor of Anambra State, Peter Obi, who meritoriously and selflessly served the state as well as indefatigable former National Chairman of APGA, Senator Victor Umeh and Anambrarians restore the billboard to its former position,” it said.

In a statement endorsed by Vincent Ezekwueme, chairman and Chidi Mbah, Secretary tagged “Be your brother’s keeper”, the CLO lamented that there has been outrageous public outcry over purported dismantling of the billboard of their former governor Nigerians and global community hold in highest esteem, honor and respect.

According to revered Mahatma Gandhi “man is great in the manner in which he works for the interest, good and welfare of others. Let us learn always to live and let live, which is the essence of human existence.

It noted that human rights organizations paid indispensable patriotic, selfless sacrifices towards the attainment of our current democratic dispensation and that all hands should be on deck towards sustenance, protection, safeguard and defend of our democracy.

“Our political leaders should bear in minds that they should be held responsible for actions of their overzealous supporters hence the inevitable need to counsel and caution them to show respect and dignity to opponents.

“Our political leaders should concentrate more in mobilizing registrants to go and collect their PVC not unnecessary overheating the political atmosphere,” the CLO said.