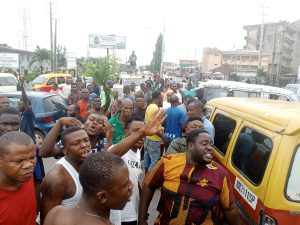 Irate drivers protesting against the enforcement of colour code by the Edo Government on Tuesday in Benin.Commercial drivers block Benin major roads in protest against colour code.

SOME commercial drivers in Benin on Tuesday staged blocked major roads in the Edo capital to protest the enforcement of colour code by the state government.

The News Agency of Nigeria (NAN) reports that the roadblocks caused a serious gridlock in the ancient city and made passengers stranded, with many resorting to trekking.

Speaking with NAN at Sapele road, Mr Samuel Omoriege said the state government was insensitive to the prevailing economic conditions when it gave a month’s notice to obtain colour code and paint their buses in Edo colour.

Omoriege said even though, drivers were saying they will not pay, government would give them six months before the enforcement.

“We are not saying we will not pay, but the notice is too short. Government is not sensitive to our condition.

“Some of us are graduates without job. For instance, I am a graduate of Auchi Polytechnic; it is unemployment that drove into this. So we need time to raise money for the code and painting,” he said.

Speaking in similar vein, Mr James Akpotarie said the recent policies of the government to drive revenue in the state were too unfavourable to transport workers.

Akpotarie said the government had just recently reviewed the daily ticket fee from N600 to N1, 800 and on Sunday N800.

“Where is government working on Sunday if not to mount further hardship on commercial drivers.

“We urge Gov. (Godwin) Obaseki to rescind the anti-people policy in order to restore law and order,” said the driver.

Addressing the protesters, Mr Washington Abbe, the Permanent Secretary in the state Ministry of Transportation, said he would convey their request to the governor.

Abbe, however, noted that to appease them, all the vehicles impounded would be released while taskforce would also relax the enforcement pending the state government position on their request. (NAN)