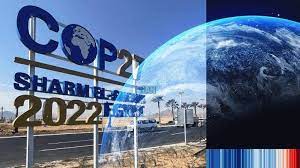 THE 27th Session of the Conference of Parties on United Nations Framework Convention on Climate Change (UNFCCC), otherwise known as COP27, ended in Sharm El-Sheikh, Egypt, on Sunday with Parties agreeing on historic fund for loss and damage.

The fund formed part of the Sharm El-Sheikh Implementation Plan on climate change after loss and damage included in the agenda for the first time.

The News Agency of Nigeria (NAN) reports that the fund is meant to support developing countries, including Nigeria, that are particularly vulnerable to the adverse effects of climate change.

The establishment will see donors contributing to a global fund to save lives and livelihoods from climate change related disasters such as floodings, droughts and earthquakes, among others.

The deal saw Parties recommit to keeping the 1.5°C target for global temperature rise intact and significant progress made across the board on climate issues.

The agreement comes despite the significant economic and geopolitical challenges of the last year and follows negotiations that ran into extra time and saw the Presidency and Parties locked in detailed discussions around the clock.

Speaking at the closing plenary, COP27 President, Sameh Shoukry, said: “The work that we’ve managed to do here in the past two weeks, and the results we have together achieved, are a testament to our collective will, as a community of nations, to voice a clear message that rings loudly today, here in this room and around the world.

“That multilateral diplomacy still work, despite the difficulties and challenges of our times, the divergence of views, level of ambition or apprehension, we remain committed to the fight against climate change.

“We rose to the occasion, upheld our responsibilities and undertook the important decisive political decisions that millions around the world expect from us,” Shoukry said.

He noted that despite the initial hiccups in the negotiations, the parties were united and worked for one aim in the end, which he said was one higher purpose and common goal.

“This was not easy. We worked around the clock. Long days and nights. Strained and sometimes tense, but united and working for one aim, one higher purpose, one common goal that we all subscribe to and aspire to achieve. In the end we delivered.”

Shoukry added that: “The agreement saw considerable advancements across board and pledges by developed countries in relation to Mitigation, Adaptation, Finance, Loss and Damage for developing countries in line with the Egyptian COP27 Presidency’s vision for the COP.”

NAN recalls that the issue of loss and damage was, for the first time, central to the agenda at the event and progress on its financing is a pivotal part of COP27’s success.

“We heard the calls, and we responded. Today, here in Sharm El-Sheikh, we established the first-ever dedicated fund for loss and damage, a fund that has been so long in the making.

“It was only appropriate that this COP, the implementation COP in Africa, is where the fund is finally established.

“Millions around the globe can now sense a glimmer of hope that their suffering will finally be addressed, swiftly and appropriately.

“The agreement and pledges made on loss and damage aim to unlock greater ambitions for mitigation and adaptation,” Shoukry said.

During COP27, financial pledges were made for loss and damage from multiple countries, including Austria, Belgium, Canada, France, Germany, and New Zealand, joining Denmark and Scotland that had made pledges previously. (NAN)