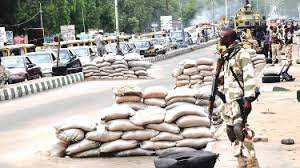 THE Coalition of South East Youth Leaders, COSEYL, the apex socio-political youth group in the South East geopolitical zone has condemned in strongest terms the dehumanizing treatments meted out to motorists by soldiers deployed on South East roads.

The primary purpose of deploying the military is to provide security, but unfortunately that purpose has been relegated to the background as the soldiers use the military checkpoints to extort motorists, dehumanize commuters and maltreat drivers, who fail to pay bribes to them through some touts who disguise as plantain chips or orange sellers.

It is embarrassing that the once highly respected profession (military) have been so reduced to a touting job where soldiers shamelessly collect bribes and even give change to motorists on our roads. South East is seriously under siege.

On January 8, 2023, Damian Ogudike and his wife were maltreated at Ihube-Uturu military checkpoint for not paying bribe to the soldiers, which is a common to anyone who passes through that road as private and commercial drivers are mandated to pay the illegal levies.

The military checkpoints on South East roads have been turned to places where innocent Nigerians are subjected to different degrees of inhuman treatments for failing to pay bribes or murmur when a motorist pays bribe.

“We demand for the immediate dismantling of all military checkpoints and roadblocks in South East roads because there have outlived their purpose.

“We demand for the immediate arrest and prosecution of the soldiers involved in the collection of bribes on our roads, which have not aided the security of the zone.

“When the mother of the goat is opening the pot of soup to steal, the kid watches to learn from her mother as the saying goes. Most Nigerian children who grow up to become criminals today learnt it from our roads as they watched soldiers and policemen collect bribes without any shame from motorists,” the group said in a statement signed by Goodluck Ibem, President General and Okey Nwaoru, ublicity Secretary.