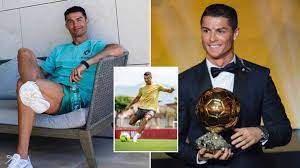 CRISTIANO Ronaldo is the greatest player of all time and it’s an irrefutable fact. Well, that’s according to one algorithm created by a leading maths professor at Oxford University.

Ronaldo is amongst those considered the GOAT in football, along with his rival Lionel Messi and Diego Maradona, Pele and a few others.

The Manchester United forward is the number one in the hearts and minds of many because he’s proved his brilliance in several leagues – and it’s one way he’s topped a new list.

Oxford maths professor Dr. Tom Crawford has come up with the GOAT index, in conjunction with LiveScore, to prove who really is the greatest of all time.

Ronaldo has been given a score of 100%, with Messi, Pele, Ferenc Puskas and Ronaldo Nazario making up the top five of players who have won two or more Ballon d’Or’s.

There are seven criteria that has seen Ronaldo top the list, and you’ll have to decide for yourself if it’s enough to put the 37-year-old in the number one position.

Former Real Madrid forward Ronaldo has scored 815 goals in 1,122 games throughout his career in all competitions, while Barcelona legend Messi has scored 769 times in 974 matches.

When it comes to club trophies, it’s the Paris Saint-Germain player who comes out on top, although Ronaldo has an extra Champions League win and league trophies in three countries.

Internationally the Portugal forward is head and shoulders above his rival having become the leading men’s international scorer ever last year.

Both have won their continents main competition, with Ronaldo winning Euro 2016 and Argentina winning the Copa America last summer to help Messi break his duck.

Both men obviously have a litany of personal achievements and records, and I guess it’s up to each person to decide which are the most impressive.

There must be a few Z-factor seasons for each player too, as both have made a huge difference to their teams’ successes, which is why they’ve won the Ballon d’Ors they have.

Either way, it’s safe to say this new algorithm, whilst interesting, won’t actually help to decide who is the best…