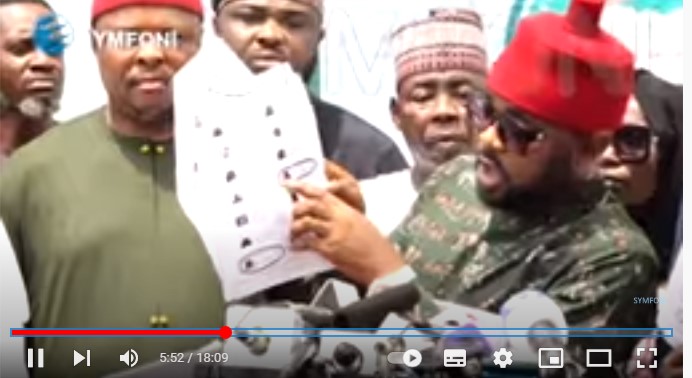 …uncovers plot to remove INEC chairman, and secret court action to stop use of BVAS

THE Coalition of United Political Parties, CUPP, has raised alarm over moves to use a secret court action to stop the use of the BVAS machine in the upcoming 2023 general election. BVAS is a new technology deployed by INEC to check rigging and manipulation of election results by politicians.

Ikenga Ugochinyere, CUPP spokesperson, raised the alarm at a world press conference, stating that the vigilance team of the group following credible intelligence discovered the Suit at the Owerri Federal High Court where it was filed since August 24.

The opposition also displayed extracts of the National Voters register which it claimed was part of at least 10 million fake registrations done by one of the APC.

According to Ugochinyere, the names were sourced from both within and outside Nigeria including some African countries such as Ghana, Cameroon, Zambia, Zimbabwe, Togo, Guinea, Gambia and countries outside Africa including Jamaica, Brazil and New Zealand.

They also showed several registrations which were captured from passport photographs and other photos.

Significant among the discoveries in the register is the fact that majority of the foreign names were all born in 1983 despite whether their photographs showed they were old or young. Many people were also shown to have been born between 1900 and 1914 yet their photographs were those of young people. Equally, many male photos had their gender written as female and vice versa.

The CUPP also alleged that Prof. Mahmood Yakubu, chairman of INEC, is under pressure to change the Commission’s hard stands on the compulsory use of the BVAS machine for accreditation or get sacked as chairman of the Commission.

Ugochinyere said that the intelligence the CUPP intercepted which has led to the discovery of the suit filed seeking to nullify the BVAS and exposure of the massive compromise in the voters register cannot now be wrong as the third leg of the plot is to sack the national chairman through a suspension as they plotters know they cannot get the required numbers from the National Assembly for an outright sack.

The group also called on international partners, local and international observer groups, civil society and the general public to help it and protect democracy as the success of any of these plots will erode the integrity and credibility of the electoral process and deny Nigerians the sovereign right to freely choose their leaders.