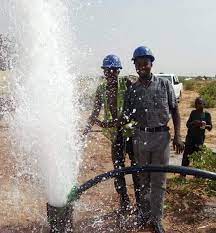 THE Yobe Commissioner for Water Resources, Alkali Jajere, said that 27 million litres of water would be produced and distributed daily under phase one of the Damaturu Water Project.

Jajere told the News Agency of Nigeria (NAN) in Damaturu that the Federal Government- funded project was expected to be completed in April.

He said that the project involved the construction of three work stations with a joint capacity to produce 27 million litres of water daily.

Jajere said he was pleased to announce that the three stations located at Sunsumma, Nayinawa and Mallamatari areas had already been completed.

“ The project was approved by the Federal Government at N6.4 billion, with 24 months completion period beginning from April 2020.

“ It comprises of three sites; each site has 10 industrial boreholes powered by solar, generator and the national grid.

“ Each of the sites also has the capacity to produce 9 million litres of water daily,” the commissioner said.

He said that already the stations had pumped over 6 million litres of water into an underground reservoir at the state Water Corporation Agency.

He added that an overhead tank currently under construction at the Agency would store up to three million litres of water.

The commissioner said the state on its part, funded the just completed reticulation of the entire Damaturu and its environs, ahead of the project completion period.

He said the initial contract for the project was earlier terminated, but later revived through the efforts of Gov. Mai Mala Buni, shortly after he assumed office.

Jajere said the completion of the project would address water shortages in most parts of the sahelian state, with ever increasing population.

On the second phase of the project, the commissioner announced that the state planned to construct a dam in Damagum to augment the project.

He noted that after completion of the dam, the reticulation exercise would be extended to many communities in Buni Gari, Babbangida, Kukareta and Ngelzarma towns among others.(NAN)