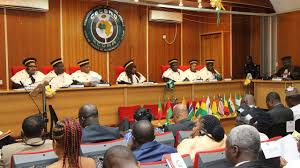 A judge of the ECOWAS Court of Justice, Justice Dupe Atoki, has expressed concern at the ‘unsatisfactory’ level of enforcement of the decisions of the Court by Member States, which stood at 34 percent and suggested the involvement of political actors in the enforcement process in order to emulate the best practices from other jurisdictions.

In this regard, the judge recommended in a paper delivered at a virtual panel discussion on “Rule of Law Crisis: Enforcement of Court judgments and the fight against corruption,” that a committee of regional ‘Ministers be constituted to monitor and supervise the enforcement of the decisions of the Court as is the case in the European court and other international systems.’

Justice Atoki cited the provisions of the ECOWAS Treaty and Community Texts on the Court, which cumulatively demonstrated a ‘clear indication of the purposeful intention of the founders of ECOWAS to establish a court that can deliver enforceable judgments.’

She, however, noted that the non-enforcement of judgment in the ECOWAS court should not be seen as an African syndrome, but a global disorder, citing the 2004 report of the European Court of Justice, which showed 144 cases where Member States failed to fulfil its obligations under Community law and a total of 2,497 since its inception.

In assessing the effectiveness of the enforcement mechanism for the decision of the Court, the judge noted that gaps were created in leaving enforcement to Member States in accordance with the rules of civil procedure of the Member State and obligates them to appoint a competent national authority for the purpose of receipt and processing the execution and notification of the Court as only six States have complied.

But in order to help change the landscape of impunity by Member States that exhibit outright disregard for the decisions of the Court, Justice Atoki argued in the paper that the time was apt to exercise the powers of the ECOWAS court to impose sanctions in line with the provisions of the 2102 Supplementary Protocol of the Community on sanctions for failure by Member States to fulfil their obligations to the Community and consistent with practices of other international courts.

Consequently, she said that the ‘lacuna in providing the modalities for non-enforcement of sanction by the court calls for urgent attention, which will involve a review of the Protocols relating to the Court,’ adding that ‘a systematic process of enforcement akin to the political sanction should be considered.’

She also challenged public spirited individuals and Non-governmental Organisations (NGO’s) to engage the process provided by Article 15 of the Supplementary Act to hold Member States accountable to domesticate Community Texts.

The panel discussion was organized by the Socio-Economic Rights and Accountability Project, SERAP, a Nigerian NGO in collaboration with the MacArthur Foundation.

The cheerleader who took on the NFL for gender discrimination

Prize money in sport: What can football learn from cricket?

AC Milan moved within touching distance of Serie A leaders Inter Milan with a victory...

‘City suffer drop in standards but remain on course for glory’

The cheerleader who took on the NFL for gender discrimination

Prize money in sport: What can football learn from cricket?

AC Milan moved within touching distance of Serie A leaders Inter Milan with a victory...